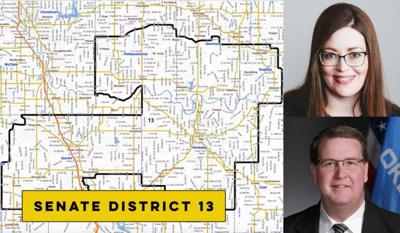 OKLAHOMA CITY — When David Mason mapped out potential hurdles facing his legislative campaign last year, he never envisioned one of the biggest challenges of all.

“Coronavirus was not on that list. You just couldn’t foresee that,” said Mason, of Enid.

Mason, who has never run a campaign before, is trying to drum up enough support to unseat an incumbent Republican state senator — during a pandemic.

Across the state, stumping for votes in the upcoming June 30 legislative primary is becoming infinitely more challenging, expensive and complex in the COVID-19 era.

Gone are the days when candidates can expect to speak to rooms packed with hundreds of residents. Many Oklahomans are skipping in-person community meetings now in hopes of slowing the spread of the deadly pandemic.

Mason, a retiree and Enid city commissioner, started knocking doors in Januar. As COVID-19 spread across the state, he was forced to switch to phone. He called a thousand potential voters, sent letters and relied on social media to get his name and message out.

As restrictions began to ease across northwestern Oklahoma, he started knocking again. Still, when someone answers, he stands 6 or 7 feet away.

“We kind of talk at a distance and try not to shake hands,” he said. “It’s very awkward because in campaigning shaking hands is what you do.”

With an election three week away, normally candidates and volunteers are door knocking like crazy, she said. This year, she doesn’t know of any campaign working doors.

“Candidates with little name recognition can usually make up the gap with elbow grease and shoe leather,” Pappas said. “However, since they can’t get out and meet voters, their only recourse are expensive signs, mailers and advertising.”

The pandemic has changed everything about campaigning in local and state elections, said state Sen. Greg McCortney, R-Ada. He's facing a contested re-election competition for his legislative seat.

“I believe this has given a great advantage to the person who raises the most money, which is not how we want our election system to work, but that is what COVID has done this time around,” he said.

Four years ago, McCortney said he knocked on a little more than 8,000 doors. This time he hasn’t knocked on any.

“I would not have been elected if it wasn’t for all the doors that I knocked on,” McCortney said. “Four year later, to not be knocking on any doors is just bizarre to me.”

He said he probably won’t knock on any doors this year and will instead focus on calling people, mailers and social media to connect with voters.

“The last thing I want to do is make anyone uncomfortable,” McCortney said. “I feel like a lot of people would welcome it, but it would make other people nervous. I don’t know who is or is not immunocompromised, and I don’t want to put people at risk like that.”

Carisa Roberson, of Ada, is trying to unseat McCortney in her quest to make Oklahoma an abortion-free state.

Because of COVID-19, the stay-at-home mother wasn’t able to start knocking doors until June 1 when Roberson said it felt like the right time to start. With so little time left, she’s mostly relying on mail and social media.

“I do wish I would have had more opportunity to reach people I won’t reach by mail,” Roberson said. “If COVID hadn’t happened, I might have spoken at more churches or events, which I wasn’t able to do. It could have been better circumstances for sure.”

At 50 cents a mailer, Roberson said cost has severely limited her outreach efforts.

“Because of the cost of the mailers, I’m not able to send (one) to every Republican,” she said. “I’m just sending to a small group of Republicans in my district.”

State Sen. Roland Pederson, who will face off against Mason on June 30, said his re-election campaign was definitely slowed by the pandemic.

“Different towns have different regulations they’re trying to enforce,” said Pederson, of Burlington. He’s a farmer and rancher, who is also trying to harvest a wheat crop in the final days of his campaign.

Pederson said he benefits from name recognition in his district, but it’s still been hard to hold public gatherings and fundraisers because of social distancing requirements. At a forum Thursday, for example, everybody sat 6 feet apart.

When he began knocking doors, Pederson said he tried not to be pushy, stepped back off people’s porches, and hung his information on doors.

So far, voters have been largely receptive to the tried-and-true campaign door-knocking strategy.

“We’ve knocked on lots of doors, and only one person actually shooed me away,” he said.

Still, Pederson said he’s planning an extra mailer this year because of the virus.

On Thursday evening, he planned to speak to a group in Enid. Only 36 people would be present, but he expected others to watch remotely through social media.

“We’re trying to get our message out one at a time, and we’re avoiding groups,” he said.