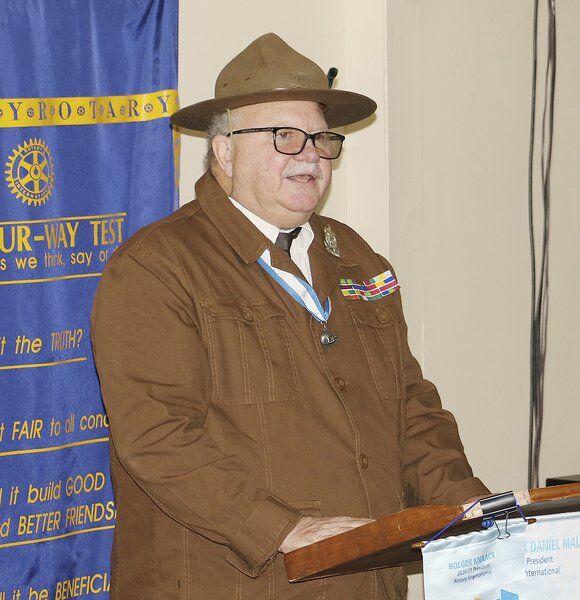 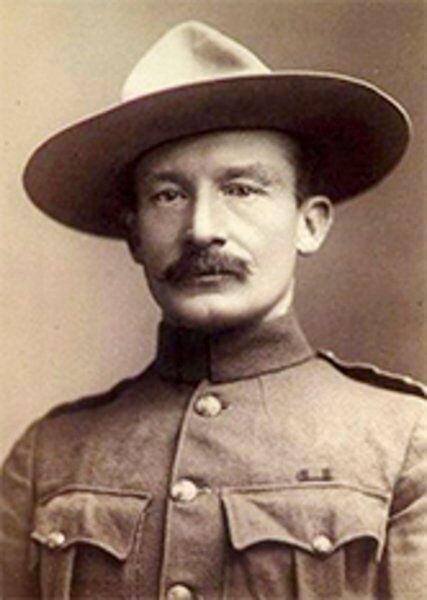 History come to life, maybe, as one individual stepped up to give a Pauls Valley group a glimpse into the thoughts of the man who established scouting more than a century ago.

Pat Fountain of Ada is a retired professor who's been involved in scouting just about his entire life.

He first joined the Boy Scouts as a youngster in the 1960s and has spent more than 700 nights camping out with the scouts, including some some very wet and cold ones in the great outdoors.

During a recent visit to the Pauls Valley Rotary Club it was Fountain who stepped into the role of Robert Baden-Powell, complete with a uniform, some makeshift medals and a hat, as he gave a portrayal of the founder of scouting.

“I actually lived two lives – first as a soldier and then as a leader of young men,” Fountain said during his presentation as Baden-Powell. “Call me BP today.”

During his time as a British military officer in the late 19th century Baden-Powell started to learn a lot of things about things like leadership and motivation. So he started to write some of those thoughts down on paper.

“I wrote down my notes on how to train men. I continued to write, and I turned the notes into a book called Scouting for Soldiers.

“With this book I was teaching soldiers things like sanitation, setting up camp, cooking and leadership. For those soldiers who did well I'd give them a little badge. I told them to point the way not only in the field but in life.”

When the soldiers eventually went home to England some would wave the books in the air during parades. “I wondered if it was a calling for me to share some of these things in my book.”

In 1907 he met with the Boys Brigade, which led to a decision to put it to the test as Baden-Powell assembled 20 youngsters for what amounted to a long camp-out.

“The lads and I arrived and we set up tents, the tents would fall down and we'd put the tents back up. It was a wonderful two weeks and it was obvious I was on to something.”

“The Boy Scouts of America was established in 1910.” That same year Baden-Powell and his sister, Agnes Baden-Powell, started the Girl Guide and Girl Scout.

Ten years later, after writing Scouting for Boys, he attended the first ever Boy Scout jamboree as scouts from all over the world gathered in London.

Baden-Powell offered guidance to the scouting movements for both boys and girls until he retired in 1937. He lived his last years in Kenya, where he died in 1941.

Fountain says although these days are on the difficult side for the Boy Scouts, he remains confident it will weather all the storms.

“It's a tough time for scouting. Between COVID to cases of child abuse to bankruptcy filings it's been tough,” Foundation says.

“I'm not a spokesman of the Boy Scouts, but I'm a lifelong member of scouting. Scouting has made some mistakes, which almost brings me to tears.”

He cites more than 93,000 cases of alleged abuses, while quickly stressing around 90 percent of those cases are at least three decades old as the most recent numbers have gone down likely because of policy changes made within the Boy Scouts.

“Scouting did not do enough. Even though the Scouts intend to settle this there will be some rough financial times. I would ask for your prayers for the Scouts and for those who were abused.

“I remind you the mission of scouting is to build character and leadership in young men. Scouting has changed but the mission has not.”