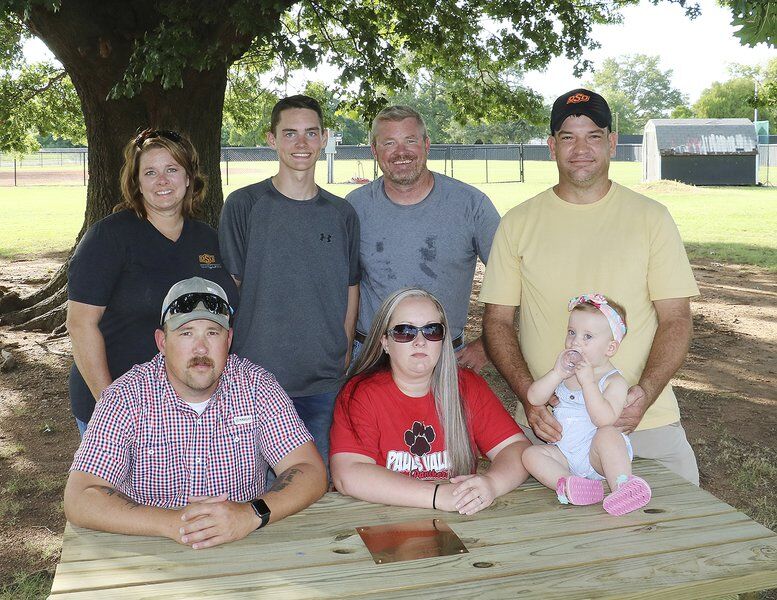 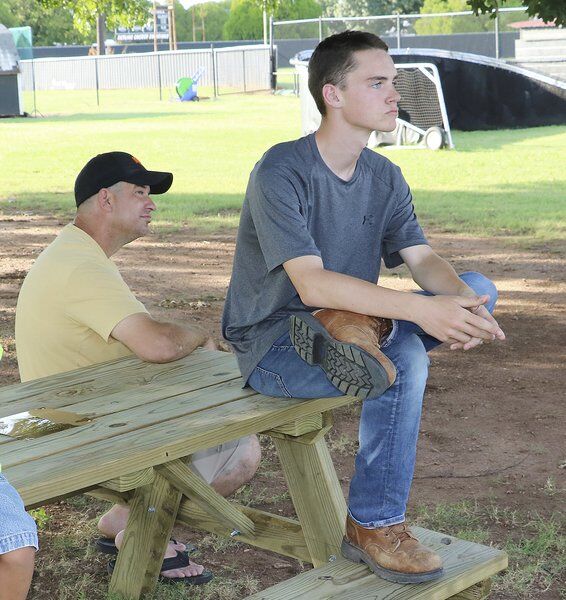 Cole Thompson takes a seat on one of two picnic tables he built as his Eagle Scout project. Shown in the back is Eddie Peters as the tables are at PV's baseball and softball fields. (PV Democrat photo)

Cole Thompson takes a seat on one of two picnic tables he built as his Eagle Scout project. Shown in the back is Eddie Peters as the tables are at PV's baseball and softball fields. (PV Democrat photo)

A Pauls Valley Boy Scout decided his Eagle Scout project wouldn't just be for the community but something to also honor a brother and sister tragically killed last year.

Local senior Cole Thompson chose to build a couple of picnic tables that can be moved around to different spots at PV's high school baseball and softball fields.

He also chose the project as the one for the highest of all scouting honors because it provides a lasting memorial to the late Kadence and Gunner Hewett, who lost their lives in a traffic accident near Pauls Valley just over a year ago.

“They both played on these fields. Gunner was a scout and Kadence played softball. I didn't really know either one of them that well, but I'm happy to do something to honor both of them.”

For Thompson the idea was to also come up with a project that would benefit some part of the Pauls Valley community.

“I started thinking there's a concession stand by the softball and baseball fields, but there's no place to sit and eat, so I came up with the idea for picnic tables,” he adds.

Kadence, who was 13 years old at the time, and Gunner, 9, were passengers in a vehicle involved in a two-vehicle accident east of Pauls Valley back on July 20, 2019.

Family members of the siblings came out to be a part of the Eagle Scout picnic tables being placed by the local ballfields, which include plaques on each table showing they're donated by Thompson and local Troop 73.

“I appreciate Cole for doing this in memory of the kids,” said the siblings' mother, Fallon Peters.

Their father, Kyle Hewett, said he earned an Eagle Scout rank as a kid in Wynnewood and is today a scoutmaster.

“It's an honor for me to get an Eagle Scout. I've wanted this for a long time,” Thompson said, adding he's been a scout since he was seven years old.

His scoutmaster, Paul Robbins, says there's a lot of paperwork in the process as it takes four steps to earn an Eagle Scout rank.

The real challenge for the scout is the whole project is on him.

“It's his responsibility to get the crew together and the work for project done,” Robbins said. “Leadership is a big part of earning an Eagle Scout.

“I'm happy to have another Eagle Scout in the community. We have a strong tradition of Eagle Scouts here in Pauls Valley.”

And there are plenty of the Eagle Scout projects getting completed in Pauls Valley with 15 over the past three years.

Joining the recent gathering to honor Thompson's completed picnic table project was Jennifer Samford, who oversees the Cub Scout program in PV for ages kindergarten up through the fifth grade.

Samford says young Gunner was a Cub Scout and about to make the transition into Boy Scouts at the time of last year's tragic accident claiming his life.

When the COVID-19 virus pandemic arrived this past March she describes the Pauls Valley scouting program as “very healthy.”

That adds up to more than 50 Cub Scouts and around 25 local Boy Scouts.

“COVID is making it difficult to recruit,” Samford said. “Typically we go to schools to give presentation but with COVID we can't do that.

“We will continue to do the best we can as long as we can do it safely,” Robbins adds.

Funeral services for K.B. McCracken were held at 2 p.m. Tuesday, September 22, 2020 at the First Christian Church in Sulphur, with the Reverend Tim Kowalski officiating. Interment followed at the Oaklawn Cemetery in Sulphur.