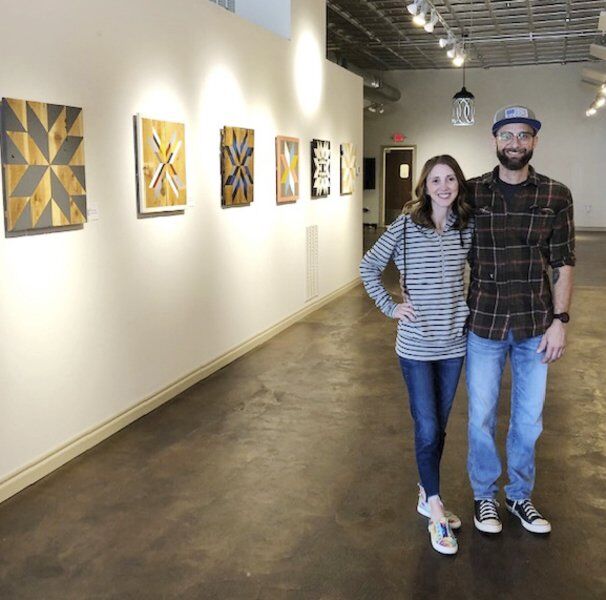 Derrick and Jasmin Tadlock of Elmore City will be demonstrating and displaying their barn quilt paintings during the return of the Fifth Friday Art Walk on July 30. 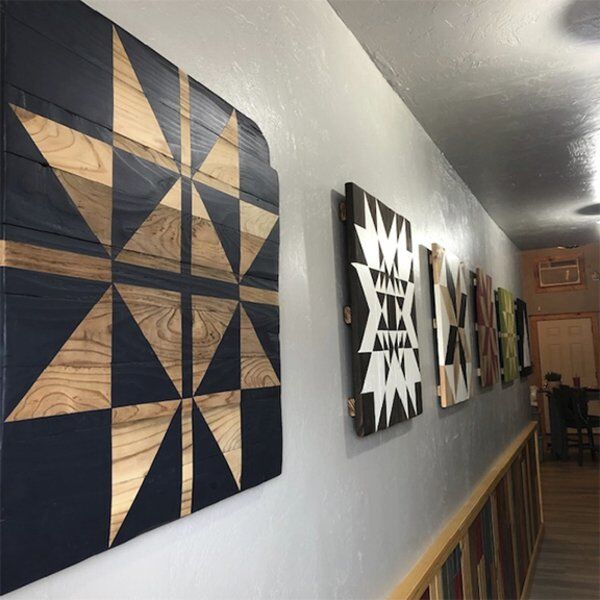 Derrick and Jasmin Tadlock of Elmore City will be demonstrating and displaying their barn quilt paintings during the return of the Fifth Friday Art Walk on July 30.

A creative kind of stroll through downtown Pauls Valley is set to soon return with a local Fifth Friday Art Walk about to make its first appearance since before the virus pandemic.

PV’s art walk is scheduled to make its comeback on July 30 with the start time naturally coming at 5:55 p.m.

Art galleries and shops in the downtown area will again be the places to go to check out the variety of art and demonstrations planned for the event.

One place is the PV Arts and Cultural Center at Paul and Walnut as the work of 4-H students in Garvin County and various other artists will be on display inside.

Art will also be on display at The Vault Gallery and Revae Brewer Gallery next to the Royal Theater.

Neon lights, along with vintage and muscle cars, are expected to be featured in the West Paul Street area, along with something new.

This return of the art walk is expected to be the time when the local arts council unveils its plans to get Pauls Valley linked into a barn quilt trail in Oklahoma.

“We are producing them as we speak,” said arts council member Bonnie Meisel, who said the group has been working on this for a couple of years.

The way it works is paintings of traditional quilt patterns, usually in a 4 by 4 size, are displayed on barns or just about anything else throughout a town.

Derrick and Jasmin Tadlock of Elmore City are expected to provide a demonstration and display their barn quilt paintings at the upcoming local art walk.

A special Halloween version of the art walk is planned for Oct. 29.

That same day will also feature the return of a unique racing event in Pauls Valley.

The Pauls Valley Waterpark will again be the place for the 5th annual Duck Derby Race and Diving Contest on Friday, July 30.

The event allows contestants to decorate small toy ducks in advance, which are placed in the current of the park's lazy river for a race that tends to break out in smiles for those watching.

There will also be diving and cannonball contests to cap things off.

More information about the event is available at the Reynolds Recreation Center.

Another popular event in Pauls Valley is getting the support of city officials as it prepares to march in later this year.

Members of the PV Tourism Board have recommended some city tourism funds be approved for the 12th annual Pauls Valley Marching Band Championships.

The event held in conjunction with the BrickFest festival and PV Police Car Show is set for Sept. 25.

Bands from all over the region are expected to take part in a marching contest, which goes right through the BrickFest crowd in downtown PV, and a field competition at the local football stadium.

More on the band event will come later in the PV Democrat.

Jerry Ray Suggs, 90, passed away peacefully on Sunday, October 18, 2020 in Chandler, Texas where he lived with his son, Jerry Suggs Jr., and his wife Susan. He was born in Pauls Valley, Oklahoma on June 4, 1930 to James Edward and Hattie Suggs.

Anna Jean Park of Pauls Valley, Oklahoma was born on March 12, 1938 in Crawford, Oklahoma to Delbert and Mary Lucas. She peacefully passed away on July 2, 2021 in Oklahoma City, Oklahoma at the age of 83 years.