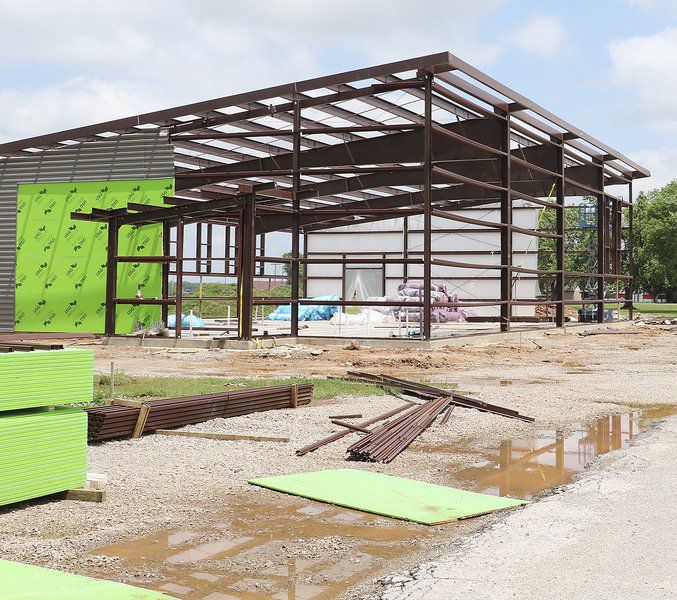 The metal frame offers an early glimpse of what a new band building is going to look like as construction continues on the campus of Pauls Valley's high school. (PV Democrat photo) 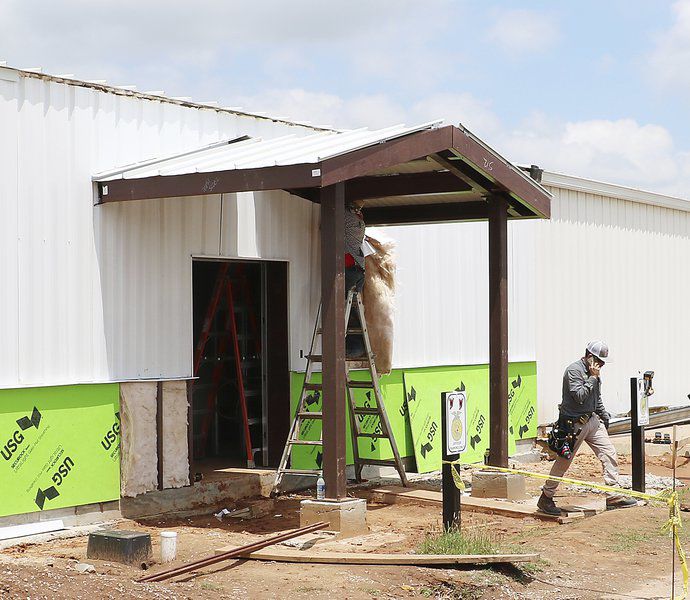 Workers are shown just outside the front door of what someday will be a new classroom for the agriculture education program at PV High School. (PV Democrat ph

The metal frame offers an early glimpse of what a new band building is going to look like as construction continues on the campus of Pauls Valley's high school. (PV Democrat photo)

Workers are shown just outside the front door of what someday will be a new classroom for the agriculture education program at PV High School. (PV Democrat ph

For Pauls Valley's schools there have been a couple of bright spots through all these strange days of school closures and no public gatherings coming from the COVID-19 pandemic.

Both are for the handful of ongoing building projects coming from a bond issue approved by local voters back in 2018.

Superintendent Mike Martin says the virus threat has not slowed down the projects even with schools closed since mid-March, while the best news of all comes on the money side.

“One thing that hasn't slowed down is construction,” Martin said. “The construction projects are all going well.

“If you look around you'll see they're moving along. They haven't slowed down out there. They're installing a lot of cable and stuff for IT,” he said referring to all the interior work to equip the technology needs of a new elementary school being constructed on the west side of town.

The exterior of a new agriculture education classroom has taken shape at PV High School, while a future band building there now has metal rising high into the sky.

Many of the planned renovations are done inside the PV High School gym as some new seating in the gym is expected to come later.

Also addressed has been a special library memorial planned for the new grade school.

That school, which will house prekindergarten through the third grade when completed, will also include the Rita Millard Memorial Library.

Earlier this year the board voted on the name for the future school library based on a $20,000 donation made by the family of Harry Millard back in 2018 to honor his late wife.

“Harry Millard has checked it out. The plaque inside the library that will honor her is shaped like a book. It's really neat,” Martin said.

Not that long ago school officials learned the bids for the band building, ag classroom and gym renovations were coming in higher than expected.

At that time it was thought the local school district might have to find other monies to supplement the projects as way to keep their “integrity” in tact.

Since then it’s a kind of reversal of fortune as the sale of bonds for the projects went much better than expected.

Put simply, that means the additional funding now looks to be in place to pay for the projects.

“The good news is bonds sold for more than expected,” Martin said.

“We’re not going to have to supplement that project. Evaluations went up and bonds sold for more than expected.”

It was last fall when actual bids for the three projects were opened, which resulted in the costs projecting out to around $300,000 over budget.

Another big factor is the fourth bond project, the construction of a new school, included a cost of about $660,000 for the technology needed for the building.

That total was not included in the bidding process, which meant the district was possibly looking at needing nearly $1 million to complete all four of the bond projects.

Martin said that’s flipped around completely thanks to the positive results of the recent bond sales.

“That’s how much the technology is going to cost for that build,” he said about the future elementary school.

The good news from the sale of project bonds now leave that total around $16,000, which Martin said can easily be absorbed by the district’s regular budget without impacting the projects.

As for the elementary school, projections now have the construction process well over 80 percent complete.

Joni Francis McConnell was born to Keevin McConnell and Debra (Oliver) Barth on February 20, 1983 in Duncan, Oklahoma. She passed from this life on May 23, 2020 in Oklahoma City, Oklahoma, at the age of 37 years.