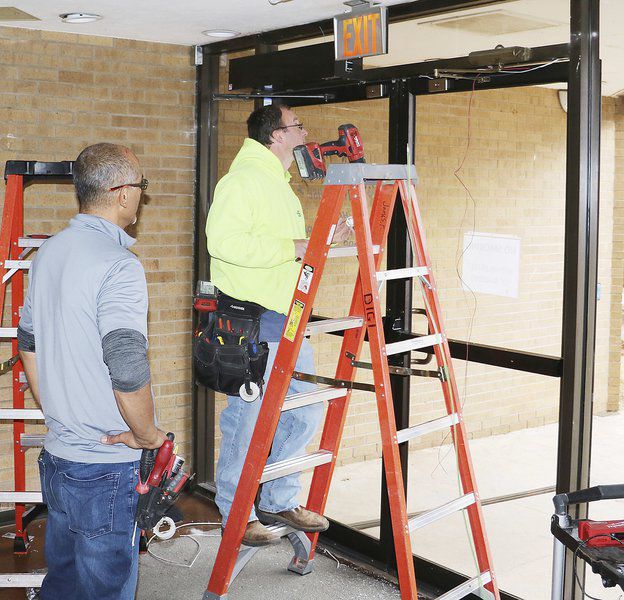 This two-man crew adds some things to one of Garvin County's courthouse doors as part of a plan to soon upgrade security measures at the facility in Pauls Valley. (PV Democrat photo) 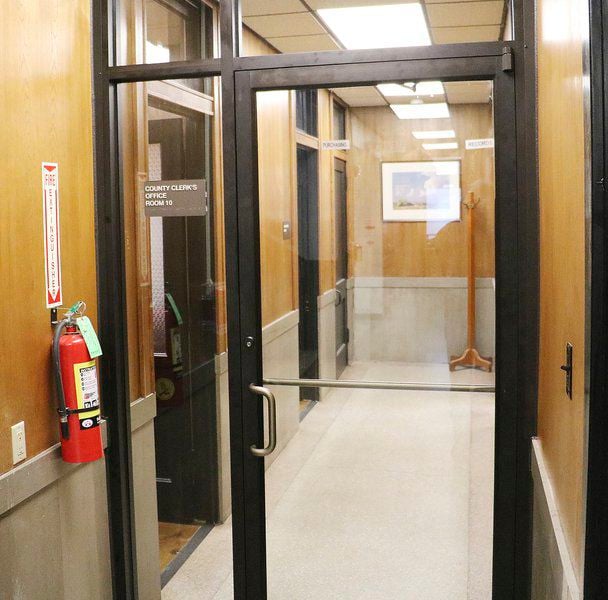 This brand new door placed in a second floor hallway is only one part of upgrading security at the Garvin County Courthouse. (PV Democrat photo)

This two-man crew adds some things to one of Garvin County's courthouse doors as part of a plan to soon upgrade security measures at the facility in Pauls Valley. (PV Democrat photo)

This brand new door placed in a second floor hallway is only one part of upgrading security at the Garvin County Courthouse. (PV Democrat photo)

It looks to be a team effort for a plan to someday soon beef up security in a big way at Garvin County's courthouse building in Pauls Valley.

All three county commissioners will have the final say as Sheriff Jim Mullett and others are for now focused on what's needed to upgrade the facility's security measures.

As it stands now the plan is to narrow the number of entry ways into the courthouse, while also maybe stationing deputies at those spots and adding metal detectors.

“This is something that's been on the table for some time,” Mullett tells the PV Democrat.

“What we're going to do is enhance the security of the courthouse.

“We want to make sure the security is better for employees and those people coming to the courthouse. We want to provide great security for people that come here, for the employees that work here.”

Right now there are five doors that provide the public with access to the courthouse.

The current plan, which has not yet been finalized, is for the three doors in the original courthouse building to be closed and locked up virtually all the time with no access for the public.

In this scenario, the two doors on both ends of the first floor annex will be the only places to enter the building.

In both places visitors would be greeted by a county deputy and a metal detector.

Mullett said he's planning to create two new positions in the sheriff's office for the deputies who will oversee the two detectors at the annex entry points on a full-time basis.

Although not accessible by the public, there are two other entry ways on the outside of the building. That's where employees working in the courthouse are expected to enter and leave the building each day as special key cards would be issued to each one.

“With this system we can lock down the courthouse by the press of a button,” Mullett said, adding more meetings in January will help finalize the plans.

“We'll be able to open up all access doors and allow for an evacuation or we can lock it down to secure the courthouse.

“Right now it's the tentative plan.”

Whatever that improved security plan winds up being it should get started at some point in the 2020 calendar year, the sheriff said.