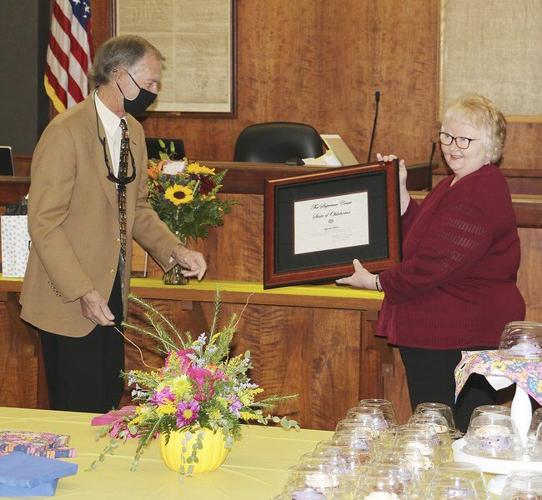 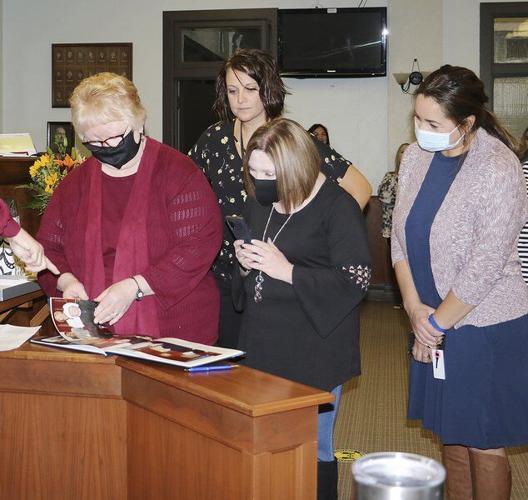 Lynnette Burr (left), her daughter Carla Owen (center) and others check out a special book made to honor Burr's 40-year career as a court reporter in the courtrooms of Garvin County. (PV Democrat photo)

Lynnette Burr (left), her daughter Carla Owen (center) and others check out a special book made to honor Burr's 40-year career as a court reporter in the courtrooms of Garvin County. (PV Democrat photo)

For Lynnette Burr one unexpected career in one place is about to wrap up as she's set to retire after about four decades working as a court reporter in the courtrooms inside of Garvin County's courthouse.

It's actually about 40 ½ years Burr has been that court reporter taking down the words spoken at a variety of formal proceedings overseen by more than a dozen different judges over the years.

With Burr set to retire from the job on Sept. 30 she was recently surrounded by a handful of judges, attorneys, staff members from the court clerk and district attorney offices and others for a reception in her honor.

That gathering, naturally in a courtroom, was a good time for Burr to reflect on how she never planned to be a court reporter working on a stenograph machine to take down every word of a court trial or proceeding.

“I hadn't ever heard of what a court reporter is. Then on career day in high school I saw this shiny machine and thought it was cool,” Burr said about her school days back in Kansas.

“A teacher thought it would be good for me because I was good in English and I could play the piano. I fell for it.”

Then came an opportunity to work as a court reporter right here in Pauls Valley as she was hired in March 1980 by Judge Haskell Paul.

“My first reporter job, my only reporter job has been right here. What I've enjoyed the most is working with the people here in the courthouse. The local bar (association) has been great to work with,” she said about a long line of attorneys conducting their business in the courts here over the years.

“There's something different every day. It's tough work, but usually I'm so zoned in trying to get down every word. That can be stressful and exhausting but rewarding at the same time. It's been a good ride.”

With so many judges coming for the reception, Burr was quick to say they're the ones that make all difference when it comes her job as court reporter.

“Your judge makes all the difference in the world. When you have a judge that protects you that's a gift. It's like being handed a platter of ease.”

When Burr first started her reporter career she used a typewriter. She later had the “world by the tail” when computers came along for her work in the late '80s. Then came computer-aided transcription and audio sync systems.

“The technology has advanced so much over the years, but I think it still takes the human touch.”

Also in the middle of the reception was Lynnette's husband, Haydn Burr, and daughter, Carla Owen.

“I came especially for my mom,” Owen said while walking into the courthouse for the reception.

“I'm so proud she is being honored. She's so dedicated and loyal. I don't think anyone has been here longer. She's done her duty well.”

One former judge who always has something to say wasn't shy about offering high praise for Burr's work.

“I was here when Lynnette was a red-haired girl who came from Kansas to serve as a court reporter here,” said Richard McClain, who once served as the associate district judge in Garvin County.

In fact, McClain called Burr a “court reporter extraordinaire” moments before presenting her with a couple of plaques.

“There are some court reporters faster, some are more accurate, but I believe there is no court reporter in the state as fast and accurate as Lynnette,” he said.

Leah Edwards has been Garvin County's district judge long enough these days to know Burr is more than just good at her work.

“Lynnette is one of the very best court reporters in the entire state of Oklahoma,” Edwards said.

“We've been blessed to not only have a great court reporter but a wonderful friend. We're going to miss her more than words can express.”