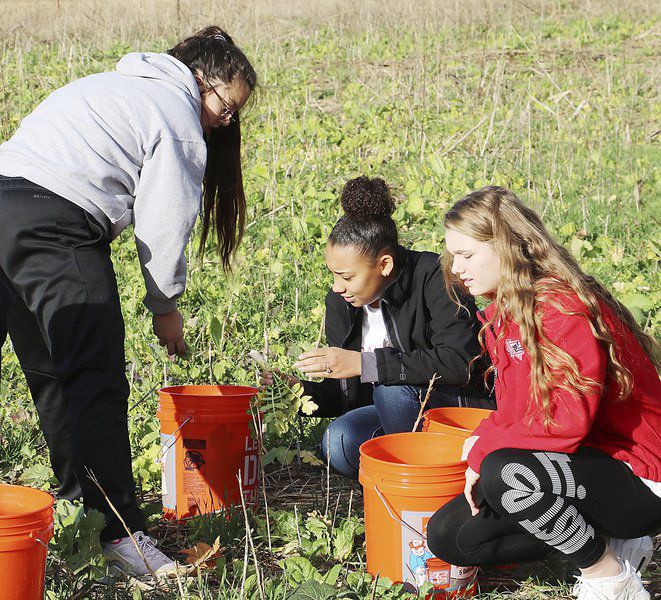 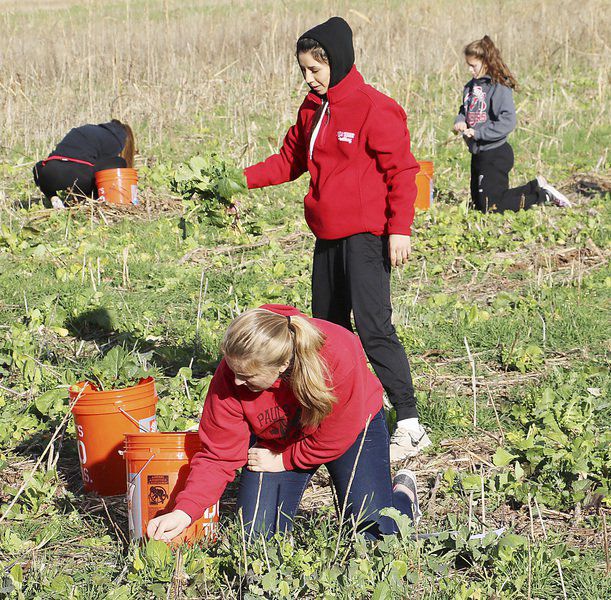 Volunteering their time to pick veggies in a field between Pauls Valley and Wynnewood are members of the PV High School Student Council. (PV Democrat photo)

Volunteering their time to pick veggies in a field between Pauls Valley and Wynnewood are members of the PV High School Student Council. (PV Democrat photo)

A group of Pauls Valley students picking vegetables in a field is only one part of a pilot program meant to produce extra food and improve soil health.

The idea of the Farm to Food Bank program is simple – bring farmers, volunteers and local food programs together to help folks in need.

At the same time the program has a focus on helping out the farm soil itself by utilizing better conservation practices. In other words, do a better job with the soil on area fields.

For the new program here it starts on farm land between Pauls Valley and Wynnewood.

Trey Lam of the Oklahoma Conservation Commission knows it well since the land belongs to his family.

Lam says the idea is to plant a variety of vegetables as cover crops to produce food that normally wouldn't have been grown.

That food then goes to places that really need it, such as food pantries scattered throughout Garvin County and senior citizen nutrition programs in PV and Lindsay.

“The last 100 years we’ve plowed this ground,” Lam said. “That exposes the surface to the elements and can kill biological activity.

“We want to make sure we had a better way of actually building organic matter back,” he said, referring to a no-till method of planting.

“This is a whole new system with cover crops, keeping residue on the ground all the time and introducing livestock. You’ve got to keep all those things going all the time.”

All of this has led to a pilot project started earlier this year. It includes several partners, including the Regional Food Bank, local conservation districts and the state conservation commission where Lam leads the way.

“It’s a program that provides land and plenty of volunteers and the food bank distributes the food grown,” Lam adds.

“We want to try and keep it local.”

That means the food is distributed to food programs in the area where it’s grown.

Helping out during a field day, literally, were members of the PV High School Student Council, who were out on the Lam family property, down on their knees, picking a number of vegetables planted for the program.

It was the third time volunteers came out to pick veggies on the local farm’s property.

“The farmer plants it, volunteers pick it, the food bank distributes the food to local feeding programs.

“A farmer doesn’t have the time to pick these vegetables. That’s why it is so important to have volunteers.”

Mark Wattenbarger of the Regional Food Bank has seen for himself the impact of the program.

In fact, he’s spoken to people who have told him how important this extra food has been for them.

“These are our partners and this is a great supplement,” Wattenbarger said while standing in the field between Pauls Valley and Wynnewood.

“It’s providing soil health and it’s a feeding program. It’s a win-win for everybody by feeding people with these cover crops.

“I’ve seen where this food goes to. It’s been a blessing to these people. It’s a huge deal for them; plus, you can tie in the health factor.”