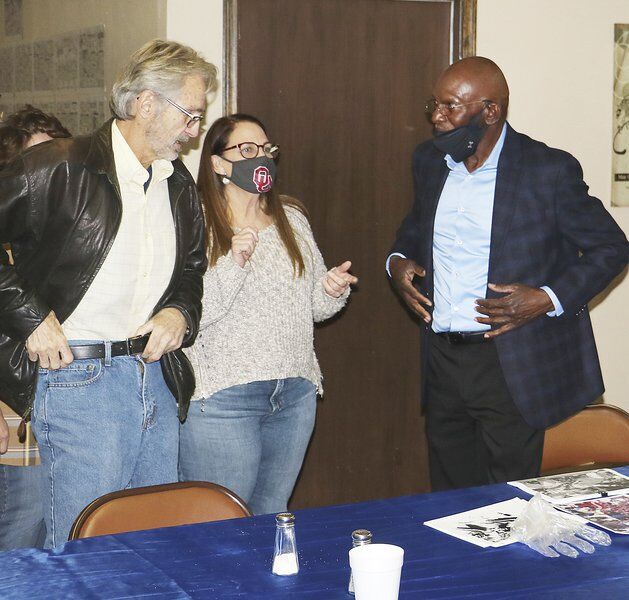 Terry Peters (right), a former Pauls Valley and OU sports star, chats with a few of those attending a Pauls Valley Rotary Club meeting after he stepped up as the featured speaker. (PV Democrat photo) 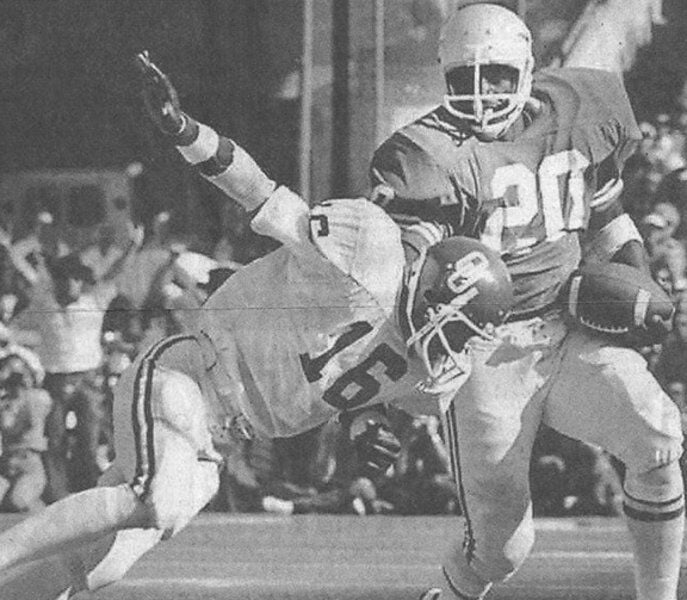 Terry Peters is shown during his days as an OU Sooners football player, here trying to tackle legendary Texas running back Earl Campbell back in the 1970s.

Terry Peters (right), a former Pauls Valley and OU sports star, chats with a few of those attending a Pauls Valley Rotary Club meeting after he stepped up as the featured speaker. (PV Democrat photo)

Terry Peters is shown during his days as an OU Sooners football player, here trying to tackle legendary Texas running back Earl Campbell back in the 1970s.

A former Pauls Valley sports star is hooking back up with an old coach from his Sooner days on the gridiron for a tasty project expected to someday come to his hometown.

Terry Peters, a 1973 graduate of PV High School, says its a facility planned for the Pauls Valley area that will grow food using more advanced methods.

Peters even cites former Oklahoma football coach Barry Switzer as one of those involved in a project that's been slowed by the virus pandemic and has yet to break ground on construction.

“It's a high tech greenhouse and it's not marijuana,” he said with a laugh. “It's for food. It will provide basically a salad for the school nutrition program.”

What's really impressive are the numbers as Peters say it's a multi-million dollar project featuring a 50-acre greenhouse under one roof.

Not offering many details, Peters said the planned facility will have an automated growing process for the plants and employ around 250 people.

“As long as Rush Creek doesn't rise we'll be OK. We'll stay on top of it,” he said about the project.

Flashing back to his childhood days growing up in Pauls Valley, Peters said his start in football was not a smooth one.

“The first time I played football it was humiliating,” he said, referring mainly to the poorly fitting football gear and shoes he had to scrounge from the trash as a youngster.

“I was scared the first time I touched the ball, but I did score. I knew I could play, but we just couldn't afford it.”

That's where Peters remembers many from the PV community coming together to help youngsters like him with things like football clothing and equipment that fit just right.

“Pauls Valley as a community helped me get to where I'm at.”

Peters says he and his friends played football “just about every single day” in places with a few built-in obstacles like hedges on one side and the “mail box was in play.”

“Some of my fondest memories come from right here in Pauls Valley. There were a lot of guys I grew up that I still stay in touch with.”

He also salutes a number of PV coaches back then for the lessons they taught on having a strong work ethic.

As for the Panther football teams back in the early 1970s, Peters said there were some good ones.

One of those years “we should have won a state title but we fumbled the ball on the one-yard line.” PV wound up losing 12-7 to Broken Bow in the title game.

Peters made his mark in football but he also experienced plenty of success running track.

“We did have three state titles in track. Here in Pauls Valley we had some speed.”

After high school he went from Wichita State to a junior college to North Texas before he wound up on the OU Sooner football team.

“I had moved to Norman and I worked out with some of the OU players,” Peters said, adding his mother and brother later informed him coach Switzer was looking to sign him to a scholarship.

He started out on the third string but worked his way up to start as a defensive back on teams that became legendary in the history of OU football.

His third and final season with the Sooners came in 1976 as Peters capped it off by being named MVP in OU's Fiesta Bowl win.

“I didn't play dirty, but I did play vicious, I played physical.”

He gives a lot of credit to Switzer and his assistant coaches for more than just their football knowledge.

“We were champions because the coaches were champions. They treated everybody the same and taught us how to be men on and off the field. Coach Switzer was a good-hearted man with any players.

“I was one of eight family members to play at OU. I had nephews, cousins and brothers play for OU. It's been really special for us.”

Peters takes a lot of pride in having played football at OU and graduating from there.

“I was the first of 13 kids to graduate from college. I'm proud that my mother was the catalyst behind that.”

After college Peters nearly made the rosters of two NFL teams and did play pro ball in Montreal, where he still almost shakes thinking about playing in a game when the temperature was 49 degrees below zero.

He also spent time playing in New Jersey when the USFL was in business.

Peters once worked for Steve Owens as the assistant athletic director at OU, and today is with the Chickasaw Nation.