You are the owner of this article.
Edit Article Add New Article
You have permission to edit this article.
Edit
Login
News
Sports
Opinion
Classifieds
Community
E-Paper
Celebrations
Obituaries
Public Notices
Contact Us
Subscribe
Shop
1 of 3 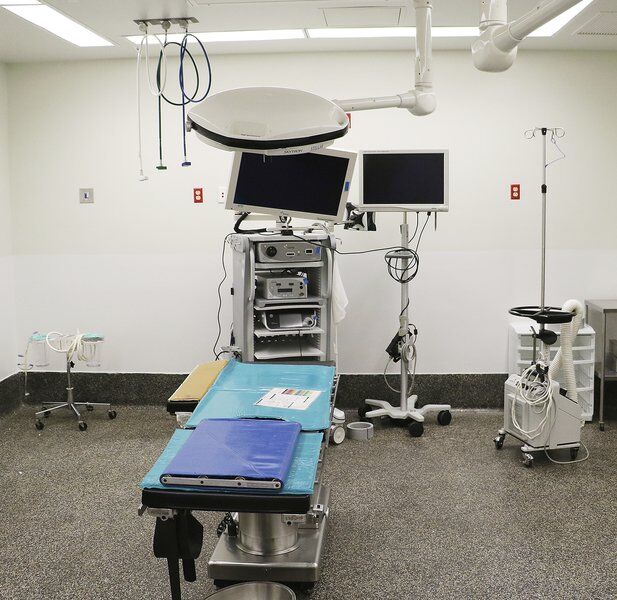 This is one of two operating rooms at Pauls Valley's former hospital. Both were remodeled shortly before the hospital closed back in 2018. (PV Democrat photo) 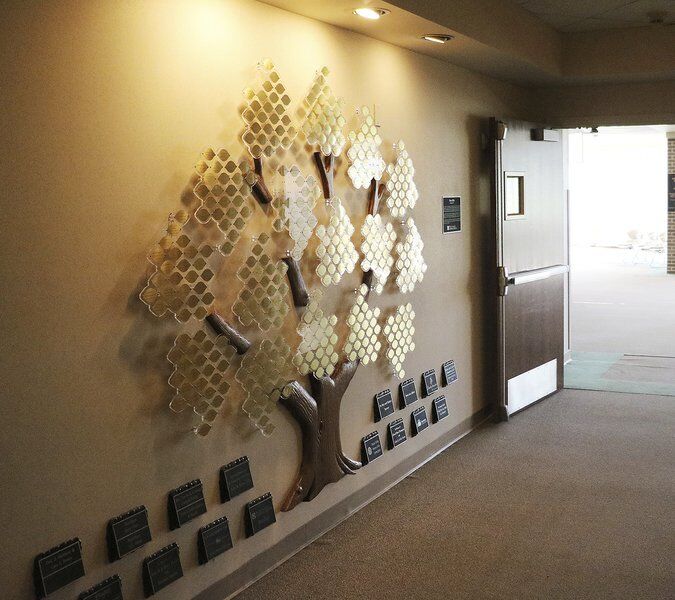 This Tree of Life display is still near the front entrance inside of Pauls Valley's hospital building, which has been closed for nearly two years. (PV Democrat photo) 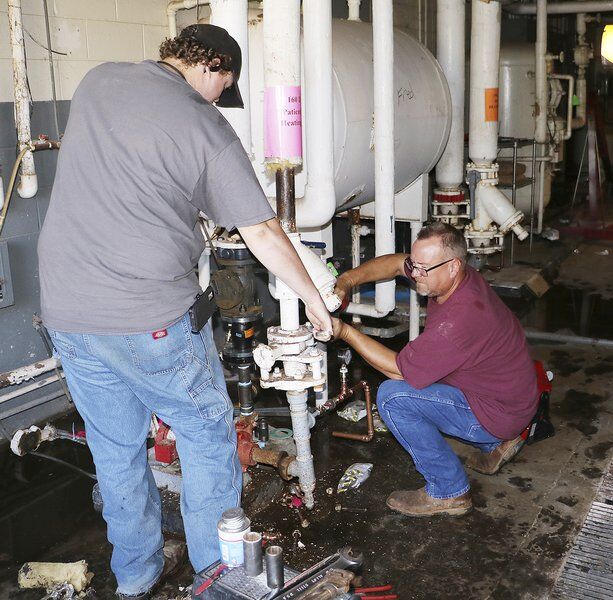 David Hood (right) and Brayden Clouse work to replace one of the many values in the mechanical area of the building formerly housing Pauls Valley's longtime hospital. Efforts are ongoing to renovate the building and get the facility's license fully active as hopes are the hospital can reopen later this year. (PV Democrat photo)

This is one of two operating rooms at Pauls Valley's former hospital. Both were remodeled shortly before the hospital closed back in 2018. (PV Democrat photo)

This Tree of Life display is still near the front entrance inside of Pauls Valley's hospital building, which has been closed for nearly two years. (PV Democrat photo)

David Hood (right) and Brayden Clouse work to replace one of the many values in the mechanical area of the building formerly housing Pauls Valley's longtime hospital. Efforts are ongoing to renovate the building and get the facility's license fully active as hopes are the hospital can reopen later this year. (PV Democrat photo)

Just about every little nook of Pauls Valley's former hospital building is getting a once-over as efforts continue moving forward to what many hope will be a new beginning for the facility.

Costs could approach the seven-figure range for the Southern Plains Medical Group as it's continuing the renovations to the building in the hope the hospital can get its “expired” license back into the fully active column.

Southern Plains officials say work over parts of the 2020 year has progressed to the point where another inspection by the state health department could come soon as the goal is to get a fully functioning hospital back open in Pauls Valley by the end of this year.

Overseeing the work is Richard Mathis, CEO of the hospital and the Southern Plains urgent care now open in the area formerly used as the emergency room.

“We're pretty much rehabbing the entire building,” Mathis said to the PV Democrat during a recent walk through of the building locked up since the former hospital closed its doors in October 2018.

“Hopefully there will not be any more gotchas. We go over the punch list over and over again. We've been in contact with the state ever since we started work here.

“In September we'll get to the last month of the quarter and we plan to send out a letter and make contact with the state department of health and see if they can come see us again for another inspection.

“We're hoping the state will allow us to have a license on a provisional basis.”

In that scenario the hospital could be open again as early as October or November.

The renovation work is all about getting the actual building ready to open again as a hospital. That means addressing a specific number of areas identified by both state inspection crews and Southern Plains officials.

It all really got started with the push to get the hospital's license at the time of its closure renewed rather that applying for a brand new one.

“The license was never returned,” Mathis says. “If the state is going to pull a license they have to notify you. Since that didn't happen the license is active but it's expired.”

That also means efforts to renew the expired license will cost a lot less than if the renovations had to bring the building up to 2020 codes.

According to Mathis, some of the improvements come from a POC, a Plan of Correction, created after a health department inspection in October 2019. The rest of the areas needing attention were from a list Southern Plains created itself.

“My first thoughts were this is not that bad of a facility,” he said about his initial walk through of the building last year. “As time went on I began to understand how difficult it would be to get it into compliance.”

Mathis was joined by Heather Mullens, who's already started her duties as the hospital's community liaison, in a recent tour of the building that includes a snapshot in time of the renovations.

Both are quick to talk about all the improvements already completed for the inner workings of the building.

“What you won't see is related to the mechanical part of the building. The chillers are up and running and we have nice cool air conditioning in here for the first time in a long time,” Mathis said.

“What we started working on at the first was the mechanical side of this, and we're still working on the boiler system. The three boilers have been neglected, which is inherent to any business that's struggling. Compound that with the building being shut down for a while.

“Mechanical would be about 60 percent of the work we're doing to the building. About everything you see that's new and shiny has been replaced by us.”

That means replacing a whole lot of valves and anything related to the heating and cooling of air and water, in addition to the building's exhaust system.

“It's the heartbeat of the building,” Mullens said while standing right in the middle of the mechanical room.

“By replacing the valves we will be able to monitor it better increasing our savings, which is a step in the right direction.”

Mathis adds the building's plumbing system has also received a lot of attention.

“We've pretty much redone in excess of 50 toilets and another 60 sinks and anything that came with the building that sat for two years.”

The entire process of renovating the former hospital building took a major hit back in March when the COVID-19 pandemic arrived. In fact, work came to a complete stop for a few weeks before eventually returning in full force.

“Everybody went home, all the companies we worked with,” Mathis said. “The contractors we had working out here pulled out and we put it in lock down. There was about a two-month lull because of the shutdown.”

The virus threat also resulted in supplies ordered for the upgrades to take three to four times longer than normal to arrive at the site.

Mathis says the plan is for Southern Plains to purchase the property and hospital building from the city of Pauls Valley and utilize all the equipment already there once the license is restored and facility back open serving the community.

When that happens the hospital will provide inpatient care with the number of beds being slightly reduced to 48, surgery and emergency room services, a full lab and future plans to bring in physical therapy and wound care services.

Right now some of the behind the scenes work is to recruit physicians to utilize the hospital facilities here once they're open, while the process of hiring a variety of staff could start soon.

Earlier this year an independent board was formed to oversee the hospital and urgent care facility as members are local residents, including some with a health care background.

“The biggest thing with the hospital is governance,” Mathis said, adding that provides the hospital with accountability.

“You've got to have a board to endorse what you're doing in the building. They get updates on the work every month.

“With as much attention as there's been in Pauls Valley we'll be under the microscope. There's a lot of interest in getting this hospital back open.

“Hopefully when we're done we'll have something the community can be proud of for years to come.”

Mullens agrees as part of her job will be to help the hospital make a real connection with the community.

“We're being proactive to make sure it's safe for patients and the staff and it will serve the community,” she said. “We want to serve the whole community.

“We want to create a sense of community with the hospital. We want people to come and go and get to know the services that we offer. We want to be a positive part of the community.”

Funeral services for Pastor Robert Adams will be held at 1 p.m. Thursday, Sept. 17 at New Life UPC in Pauls Valley. Interment will be at Belle Cemetery, south of Stratford, directed by Stufflebean-Coffey Funeral Home.

Funeral services for Pastor Robert Adams will be held at 1 p.m. Thursday, Sept. 17 at New Life UPC in Pauls Valley.

Loretta Fay Webster Frizell of Paoli passed away September 11, 2020 in Norman, Oklahoma at the age of 83 years.

On September 7th, 2020, Rubye Lee Murray, loving wife and mother of two children, was taken by the good lord at the grand age of 84. She went peacefully at home with her family by her side.