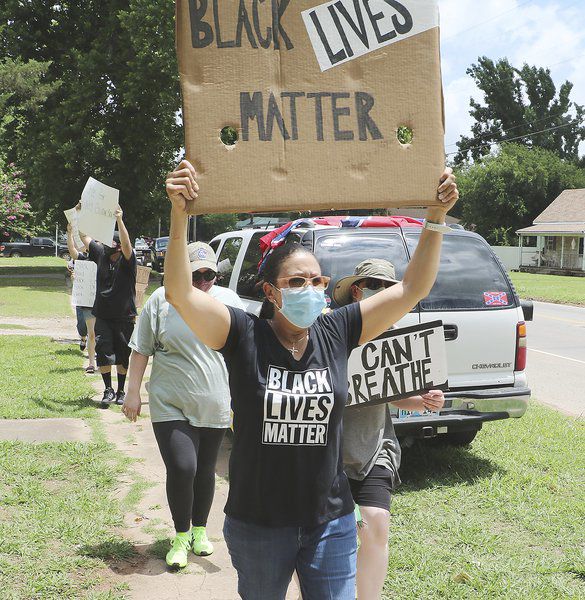 Shonte Lightfoot of Pauls Valley has a Black Lives Matter sign and T-shirt as she joined a protest march Friday in Pauls Valley. Here the group passes by a parked vehicle with a Confederate flag sticker on the back. (PV Democrat photo by Barry Porterfield) 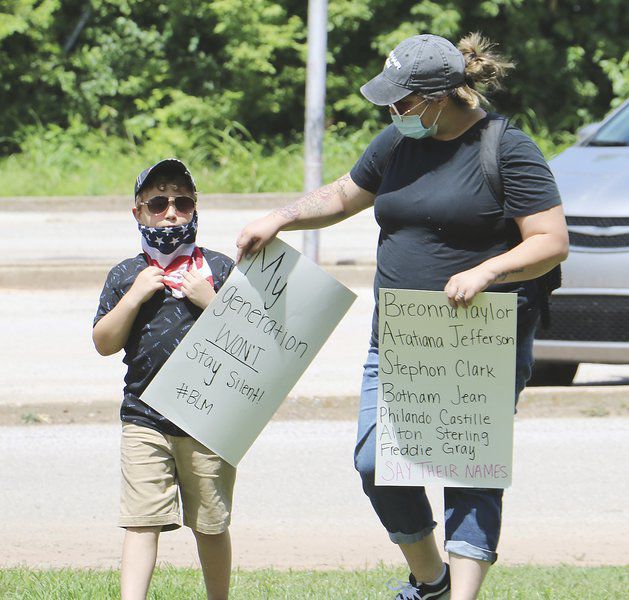 Shonte Lightfoot of Pauls Valley has a Black Lives Matter sign and T-shirt as she joined a protest march Friday in Pauls Valley. Here the group passes by a parked vehicle with a Confederate flag sticker on the back. (PV Democrat photo by Barry Porterfield)

Equality for all was at the center of Pauls Valley area residents coming together Friday afternoon to lead their own peaceful protest march organized as a Black Lives Matter event.

With no actual organizers stepping up it was instead a more local flavor as a couple dozen folks gathered on the lawn of Pauls Valley High School, armed with signs and virus-related masks for safety, before taking a sidewalk march down the main route of state Highway 19 all the way to the Garvin County Courthouse.

Peaceful but purposeful were the participants showing up to publicly express their support for unity and justice for every person of every race.

As is typical of many situations, there was an exception as one loud engine blast came from a passing motorist moments before a resident living nearby, complete with Confederate flag sticker on the back of his parked vehicle, expressed some brief anger with protesters as they walked past the local house.

Before all that it was a slow trickle of people coming for the protest even though no one there actually knew who had previously promoted the event online.

Among them were Melina Shreve of Pauls Valley and her son Marek Shreve.

“We believe in unity,” Melina told the PV Democrat. “I wanted to be here to support a peaceful protest. We don't want riots. We want a change in the system.”

Josh McConnell came by himself to check things out for himself.

“I'm with both sides – police and the movement, BLM. Nobody deserves to die at the hands of a police officer,” McConnell said.

Jamie Walker of Pauls Valley, who had a stroller out for her young son, Calvin J. Walker, said it's all about equality for everyone regardless of race.

Shonte Lightfoot of Pauls Valley said, “Black lives matter like all lives matter,” while Marquel Wright of Wynnewood, accompanied by her 15-year-old daughter Marleigh Wright, was quick to agree.

“I'm just here to support equality for everybody,” Marquel said while waiting for the march to begin.

Pauls Valley's mayor, Jocelyn Rushing, did express some frustration not being able to speak with anyone involved in organizing the march.

“It's a wonderful thing but you've got to do it the right way,” Rushing said. “When you don't have organization it brings about division.

“Fortunately that's not the case today. We're all in this together.

“Nobody can change hearts like God can,” she adds.

Also there at the start and end of the march to do his part in making sure everyone stayed safe was Mitch McGill, Pauls Valley's police chief, who is quick to say he welcomes these type of events.

“This is exactly what we needed,” McGill said. “This is local people coming together in a peaceful protest.

“It's community. These are people we can talk to and work with to make things better. We want this line of communication. This is a good thing.”

At the end of the march protestors were again greeted by McGill and other law enforcement and offered cold bottles of water while briefly continuing the protest in Pauls Valley's downtown area.