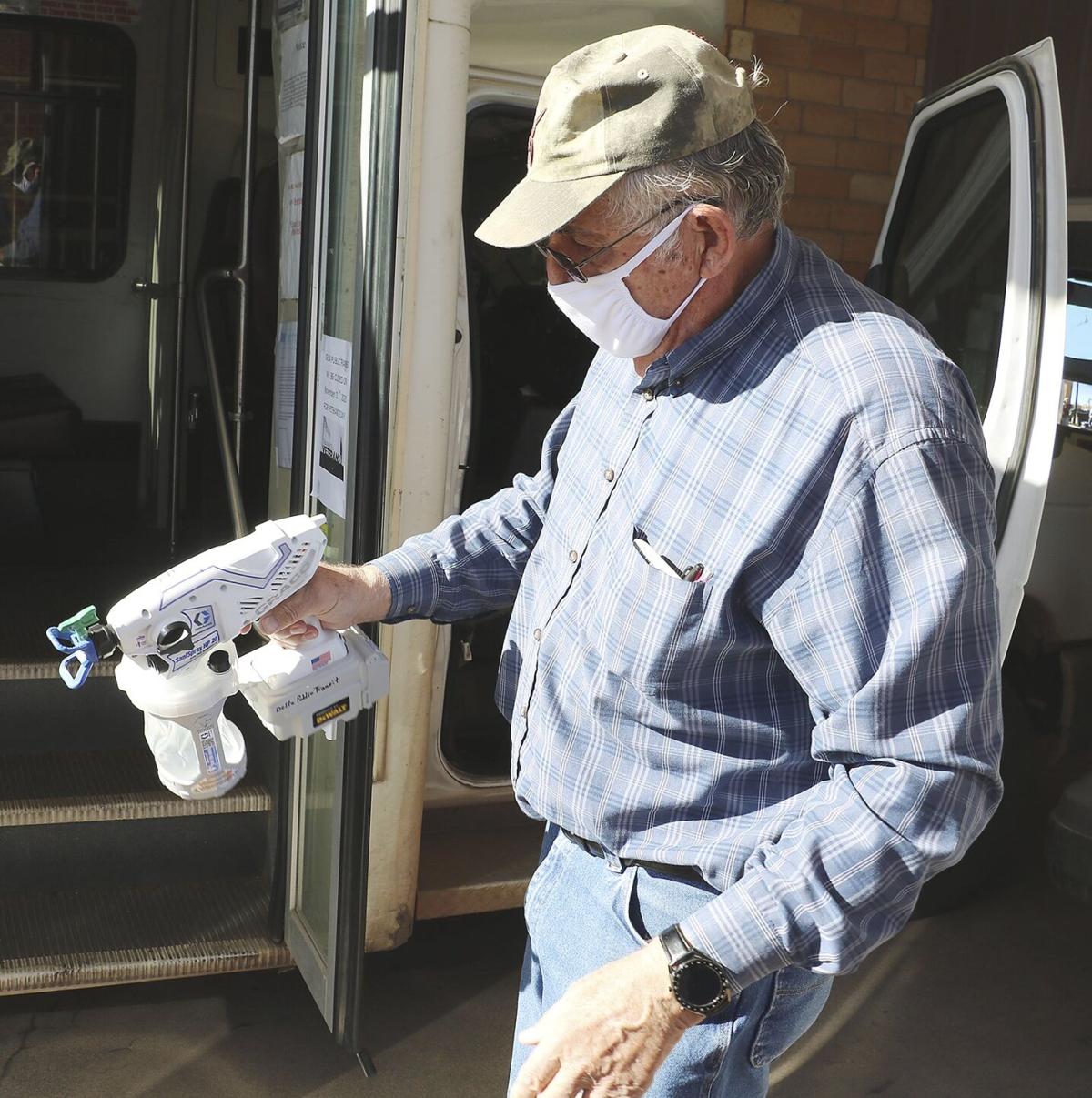 Terrell Turman holds a small sprayer allowing Delta Transit bus drivers to disinfect the vehicles they drive as a way to keep them safer for riders. (PV Democrat photo) 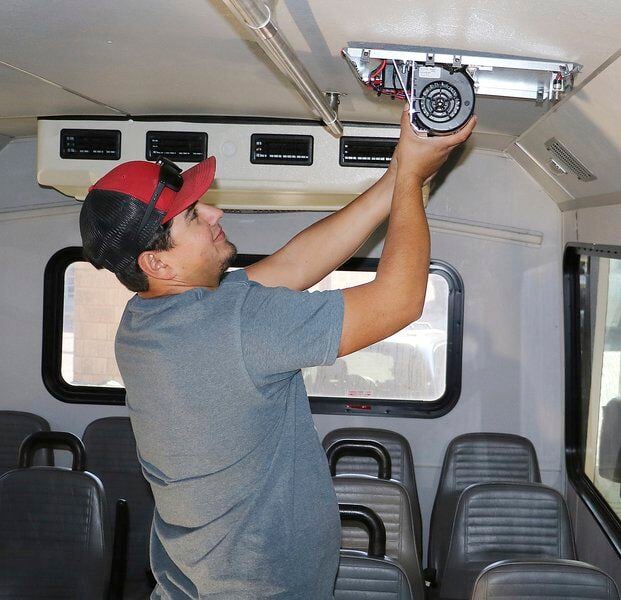 Andy Niederhofer is part of a crew traveling around installing clean air filtering systems on transit buses all over the region, including Delta Public Transit in Pauls Valley as shown here. (PV Democrat photo)

Terrell Turman holds a small sprayer allowing Delta Transit bus drivers to disinfect the vehicles they drive as a way to keep them safer for riders. (PV Democrat photo)

Andy Niederhofer is part of a crew traveling around installing clean air filtering systems on transit buses all over the region, including Delta Public Transit in Pauls Valley as shown here. (PV Democrat photo)

Public transit buses in areas like Pauls Valley and out into Garvin County as a whole are getting a breath of fresh air as a way to make the rides safer.

With ridership numbers down after the arrival of the COVID-19 pandemic a bunch of public transportation agencies in Oklahoma decided something had to be done to get more folks back on board.

What they did is reach out for some reimbursement money through the CARES Act to help get the tools needed to make the public buses safer from the virus threat.

One of those agencies is Delta Public Transit, which covers an area mainly comprised of Garvin and McClain counties.

Terrell Turman, transit director for Delta Community Action Foundation, says the monthly numbers of riders dropped by about 1,000 or so with the mileage actually going way up as the transit buses were used to deliver meals with the shut-in days of the pandemic.

“I had drivers who would haul no one during a morning shift. Prior to COVID that never happened.

“People are afraid to ride the buses. This COVID thing has put a scare in all of us,” he adds.

According to Turman, state legislators were “instrumental” in helping transit agencies in the state like Delta get approval for CARES Act reimbursements to help deal with the impact of the pandemic.

A total of around $6 million got the OK for a larger transit area in the state to get more personal protection equipment, known these days as just PPE.

About $133,000 of that money will be used to install air filtering systems in all the buses for the area Turman oversees in Garvin and McClain counties.

“These machines are going to be installed in all these buses. We want ridership to pick back up to the levels we had previously to COVID.”

The air filtering systems were only days ago placed in Delta's nine buses in the two counties, which include five vans and four larger buses.

Turman says all drivers also use hand-held sprayers to disinfect the buses as three fogging machines, designed to provide even better disinfection of the buses, have been ordered.

“There are sprayers on board they can use and these air machines will hopefully help,” he said about the fogging machines

Along with his message about the focus on better safety, Turman also wants the public to know about his drivers' dedication to serving anyone needing a ride from one of Delta's transit buses.

“We've never missed a day during the entire COVID experience,” Turman said. “My drivers showed up every day, no griping, just being there for riders.

Delta Transit is taking temperature checks of each rider and masks are required, which can be supplied to riders without one.