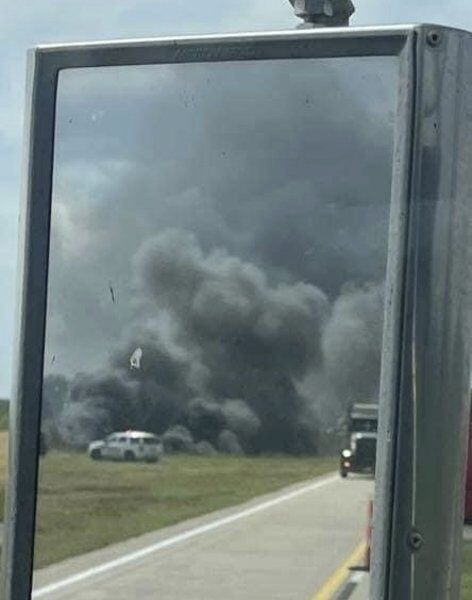 Dark smoke comes from a trailer that flipped over and caught on fire during a semi truck crash last week at the Washita River bridge north of Pauls Valley. 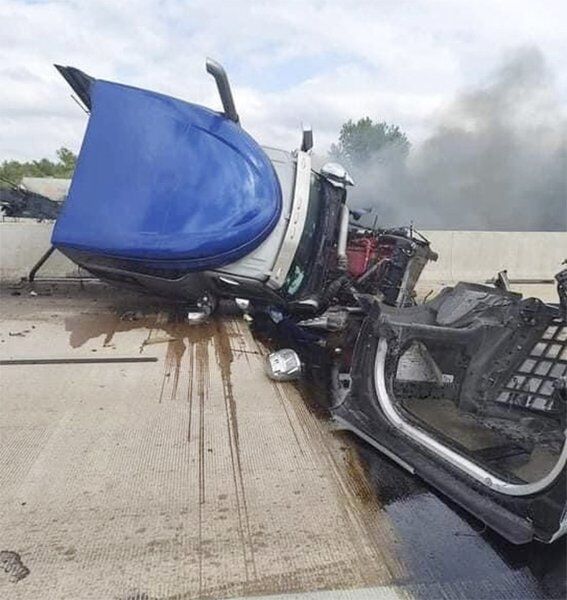 Here's the scene after a semi truck crashed into a concrete bridge barrier just north of Pauls Valley last week.

Dark smoke comes from a trailer that flipped over and caught on fire during a semi truck crash last week at the Washita River bridge north of Pauls Valley.

Here's the scene after a semi truck crashed into a concrete bridge barrier just north of Pauls Valley last week.

A state trooper says a truck driver might have thought a highway construction zone was ending when he pulled over and right into a concrete barrier resulting in an accident and one big traffic mess near Pauls Valley.

It came a week ago on Wednesday afternoon, Oct. 20 as the accident involving a single semi truck hauling a trailer just north of PV backed up southbound traffic on Interstate 35 for miles and clogged many of the nearby roads for hours.

Known for sure is a man from North Dakota was driving the truck in a portion of an I-35 construction project that had been narrowed to one lane.

At a listed time of nearly 2 p.m. that afternoon the truck moved over into the closed lane of the highway, where it smashed into the bridge over the Washita River a few miles north of Pauls Valley.

Oklahoma Highway Patrol trooper Heath Green was on the scene shortly after the accident.

He says the current construction project has orange cones on the roadway to keep traffic out of one lane.

“He was driving southbound in a construction zone with the inside lane conned off and the outside lane open,” Green said.

“For whatever reason he went over into the closed lane,” he said, adding a witness claimed at least one of the construction cones had previously been knocked over.

“He may have thought the construction zone had ended.

“When he did that he smashed right into the bridge.”

Also known is once the impact happened the frame and cab of the truck slid down the rail of the bridge, while the trailer flipped over and went down a rock embankment where it caught on fire sending dark clouds of smoke high into the air.

“I can't really say he was inattentive because he intentionally moved over,” Green said.

The driver was taken to Mercy Hospital in Ardmore, where he was treated for a non-life threatening head injury.

According to Green, another trooper went down to the hospital to talk to the man.

“He couldn't really remember what happened,” he said.

“All he could remember was driving down the road and then he was looking at his feet. He remembers seeing cars and being in his truck.

“What he did in between he said he couldn't remember.”

The accident also shutdown all southbound traffic on I-35 for nearly three hours. During that time much of the traffic was diverted onto other roads and highways, including miles of vehicles backed up on the southbound side of U.S. 77 leading into Pauls Valley.