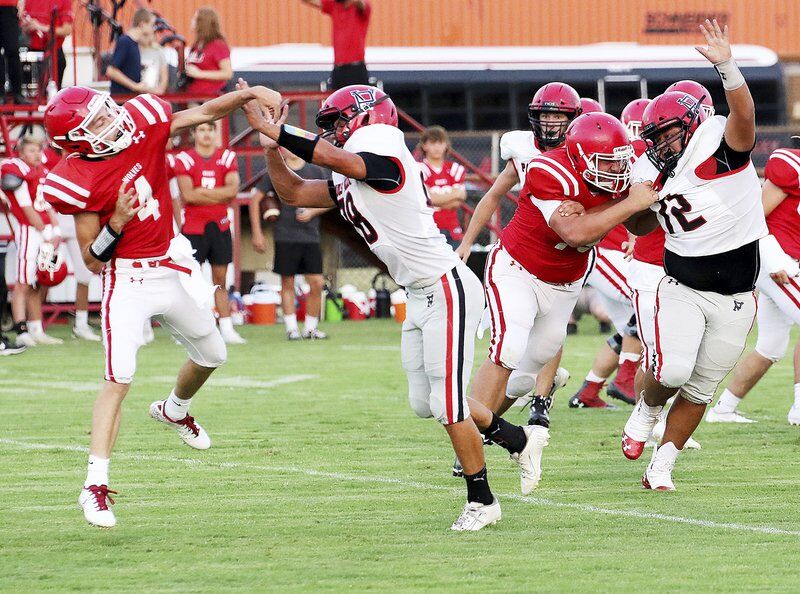 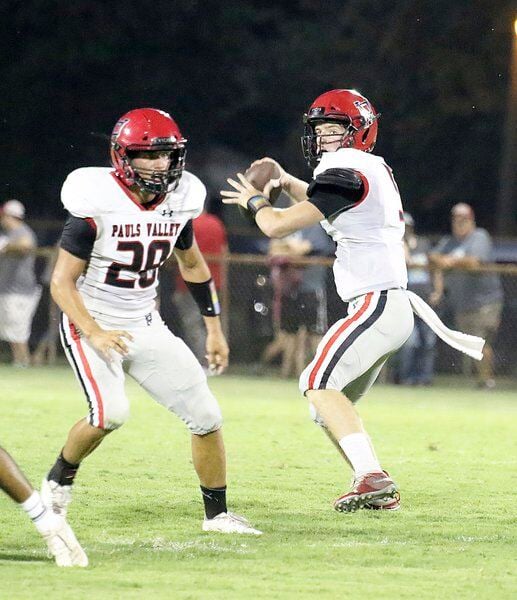 Justin Humphrey drops back to pass for Pauls Valley during the Panthers 12-7 loss to Davis Friday night. PV will host Tishomingo this Friday night. (PV Democrat photo by Mike Arie) 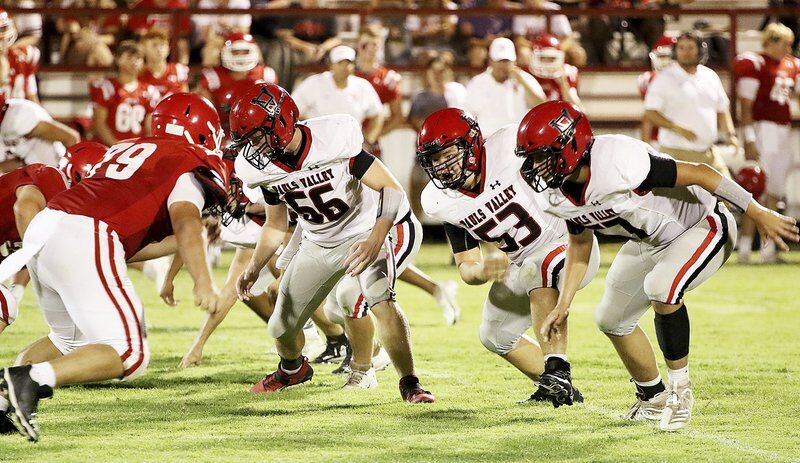 Justin Humphrey drops back to pass for Pauls Valley during the Panthers 12-7 loss to Davis Friday night. PV will host Tishomingo this Friday night. (PV Democrat photo by Mike Arie)

The ball control offense of the Davis Wolves kept the ball out of the hands of the Pauls Valley Panthers and their potentially high potent offense. Davis had the ball for over 37 of the 48 minutes in the game in a 12-7 win over the Panthers.

Davis had four drives in the game of 10 plays for more including one of 15 and another of 16. In those two drives alone, the Wolves consumed over 8 minutes off the clock in each drive.

Davis opened up a 12-0 lead in the first half on touchdown runs by Koleton Rawls and Tuff Hammons. Both players scored on one-yard runs.

Pauls Valley’s defense came up big in the second half forcing a pair of punts and a turn over on downs at the Panther one-yard line.

On the first play from scrimmage after the turnover on downs, Humphrey found a crease in the defense and got a block that sprung him to the side line where he outran the Davis defense for a 99-yard touchdown cutting the margin to a single score.

The Panthers tried an onside kick but the Wolves recovered at the Davis 48-yard line. Davis was able to run out the final 4:47 of the game holding on for a 12-7 win.

After two games, the Panthers will finally get to play at Thompson Field Friday night when the Tishomingo Indians come to town. The Indians are 0-2 on the season after a 54-32 loss to Allen on Friday night.

Tyson Barrett led the Indians with 165 yards passing and 5 touchdowns. He also rushed for 116 yards on 15 tries. Nick Strouse had 100 yards receiving and two touchdowns.

Mary Lou Walker of Lexington and a longtime resident of Pauls Valley passed away September 15, 2021 in Lexington, Oklahoma at the age of 94 years.

Bradley Nelson Wood of Paoli passed away September 17, 2021 in Paoli, Oklahoma at the age of 53 years.

Brenda Elaine McClain Carden of Purcell was born October 20, 1943 in Wynnewood, Oklahoma to Aubrey Jackson McClain Sr. and Ethel Inez McClain. She passed away September 12, 2021 in Norman, Oklahoma at the age of 77 years.

Joy Fern Goggans Alexander of Wynnewood passed away September 11, 2021 in Sulphur, Oklahoma at the age of 83 years.