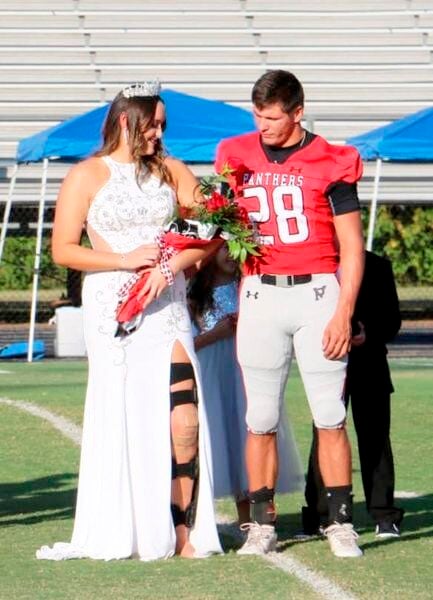 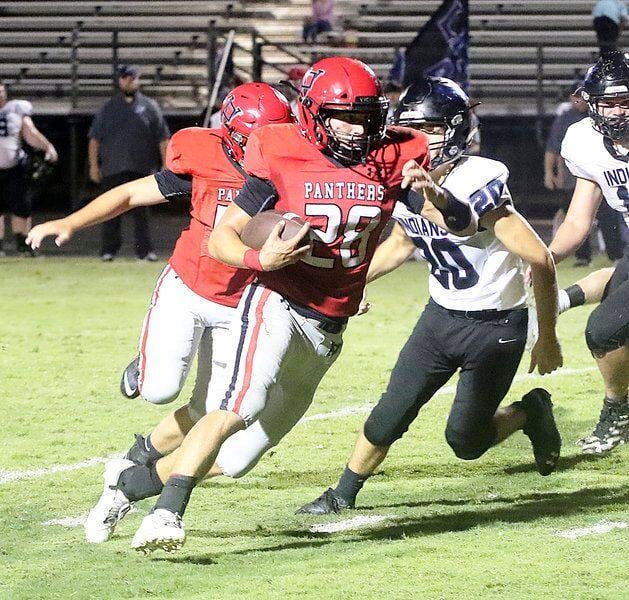 A dominate defensive performance in the first half led the Pauls Valley Panthers to the first district win Friday night with a 43-0 shutout of Little Axe.

Little Axe caught the first break of the game when Jacek Graymountain-Gross recovered a Panther fumble 90 seconds into the game, returning it to the Panther 23-yard-line.

The Indians moved the ball down to the Panther 3-yard line after a fourth down run by Kameron Farris. PV's defense stepped up with back-to-back stops in the backfield setting up a third-and-goal from the 7-yard-line. Farris dropped back to pass on third down and while under pressure threw toward the endzone. TK Jaggers stepped in front of the pass at the two-yard-line, returning it 98 yards for a Panther touchdown, his second career INT for a touchdown against the Indians.

Pauls Valley got the ball back with five minutes left in the quarter at their own 42-yard-line. Jaggers almost had his second touchdown of the night on a jet sweep but was knocked out of bounds at the Little Axe 31 after a 27-yard gain. Justin Humphrey had a 30-yard touchdown run called back because of a holding penalty. On a third-and-10 from the 31-yard-line, Humphrey dropped back to pass and hit Mason Prince with a pass for a touchdown.

On the ensuing kickoff, PV pinned Little Axe back deep in their own territory at the 3-yard-line. On the first play from scrimmage, Rayne Major tackled Farris in the endzone for a safety and a 16-0 lead.

Pauls Valley got the ball back at the Little Axe 24-yard-line after a big return by Prince. Humphrey's 17-yard run on second down gave PV a first-and-10 at the 13-yard-line. Weilenman took over from there with three straight runs including a 6-yard TD run out of the Wildcat.

The first quarter dominance wasn't over as Jaggers picked off Farris once again returning the ball to the Little Axe 9-yard-line. This was Jaggers fourth interception against the Indians in two seasons.

Weilenman got the call again scoring on a 9-yard run for a 30-0 first quarter lead.

After forcing a Little Axe punt early in the second quarter, PV got the ball back at their own 33-yard-line. PV moved quickly down the field on runs by Humphrey and Weilenman. On first down from the 29-yard-line, Humphrey went to the air and hit Mason Smith with a touchdown pass and a 37-0 lead that they carried into the half.

Pauls Valley opened the second on defense but got the ball back at their own 27-yard-line after forcing a Little Axe punt. The Panthers kept the ball on the ground with Weilneman. He carried PV down the field to paydirt scoring on a 16-yard run pushing the lead to 43-0 and the starters to the bench.

Little Axe moved the ball on the Panther backups but still couldn't cross into the endzone.

Perry moved the Panther offense from his QB position, orchestrating a six-minute drive late in the fourth quarter that left very little time on the clock.

Pauls Valley will be on the road this week as they travel to Sulphur to face the Bulldogs. Sulphur is 3-2 on the season and 2-0 in district play after beating previously unbeaten Madill last week 42-2.

Sidney D. Bales of Elmore City, Oklahoma was born to Delbert Dayton and Dorothy Marie (Moody) Bales on March 20, 1949, in Madill, Oklahoma and passed from this life on October 17, 2021 in Norman, Oklahoma at the age of 72 years.