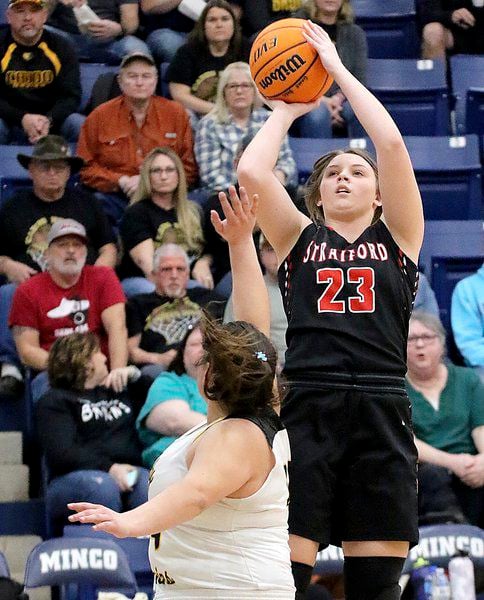 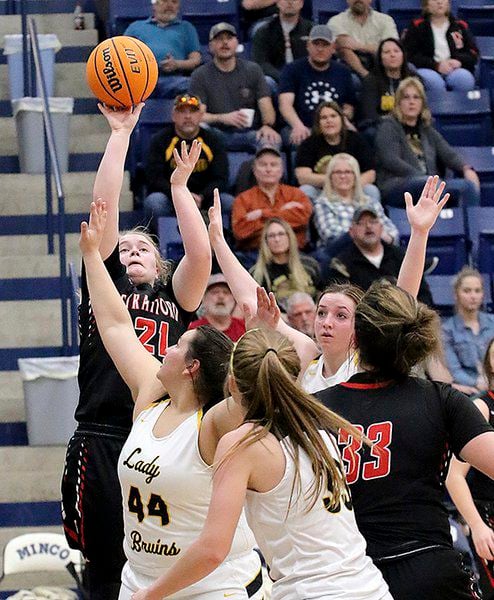 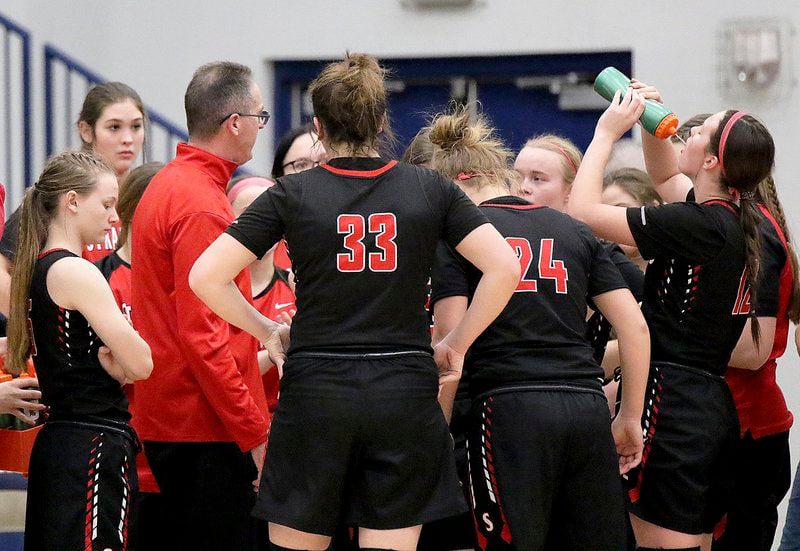 The Stratford Lady Bulldogs ran into a buzzsaw in the Class 2A Area IV Regional Tournament Finals Saturday. That buzzsaw was Kynsey Dixon and the Caddo Lady Bruins.

Dixon scored a game high 26 points including 17 in a 19-point second quarter that pushed the Lady Bruins lead from four to 17 in a 53-35 win.

Stratford never led in the game but stayed close through out the first quarter. Abbi Peoples and JimyJo Lemmings both hit 3-pointers in the first quarter and Jaedyn Getman had two baskets. A late 3-pointer by Abby Thomas pushed the Bruin lead to 14-10.

That 3-pointer started a 12-0 run as Dixon connected on seven points. Stratford got back to within 12 but a 7-2 jaunt at the end of the half pushed the Caddo lead to 33-16.

After Caddo opened up a 19-point lead early in the second half, Peoples' 3-pointer sparked a 9-3 Stratford run that cut the lead to 13. Lemmings had four points in the run.

Caddo scored the final four points of the third quarter for a 42-25 lead.

Peoples hit a 3-pointer to start the fourth quarter but Caddo responded with four straight points. A 7-2 Stratford run cut the lead to 13 with two minutes remaining behind Abby Wood's four points.

Caddo hit 5-of-6 free throws down the stretch pushing the final margin to 53-35.

Lemmings and Peoples led the Lady Bulldogs with 9 points each. Wood added 8, Getman 7 and Laney Anderson 2.

The Lady Bulldogs fall to the Area Consolation bracket where they will face Merritt at Southwestern Oklahoma State University at 6:30 p.m on Thursday,

On Sunday, November 22, Clint “Butch” Riddle of Buncombe Creek Oklahoma died at the age of 76 resulting from complications from COVID-19.

William David Woods of Stratford, Oklahoma was born November 27, 1965 to Jerry Lawrence Woods and Patricia Ann (Engle) Woods in Jacksonville, Arkansas. He passed away November 29, 2020 in Oklahoma City, Oklahoma at the age of 55 years and 2 days.

Mark Randel Neal, 55, was born on October 22, 1965 in Oklahoma City to James Sidney and Ruth (Bourbonnais) Neal and passed from this life on November 26, 2020 in Pauls Valley.