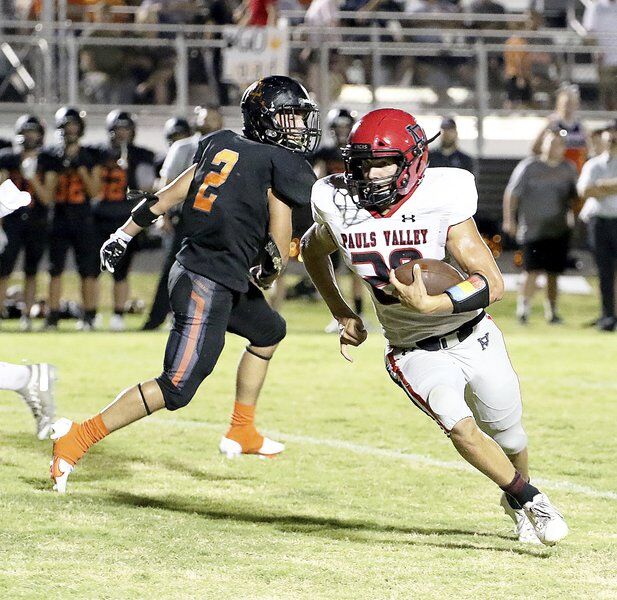 Pauls Valley back Landin Weilenman finds some running room on the outside during Friday’s 20-7 loss to rival Lindsay. (PV Democrat photo by Mike Arie) 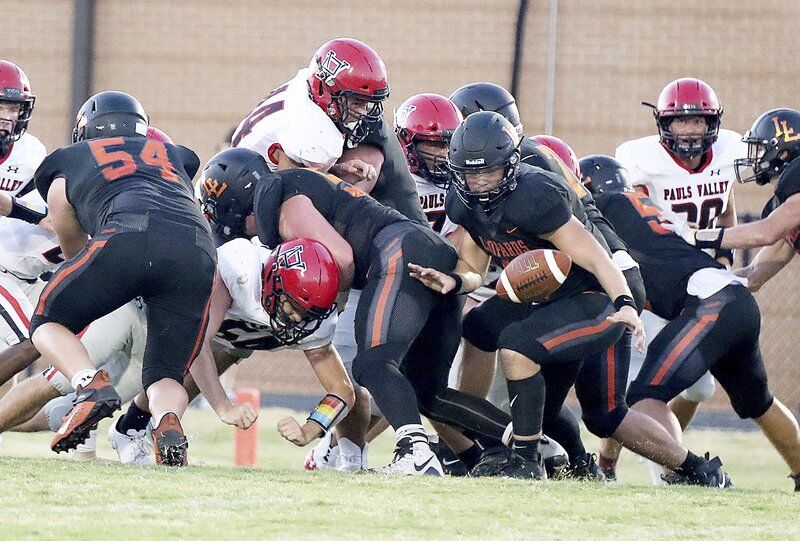 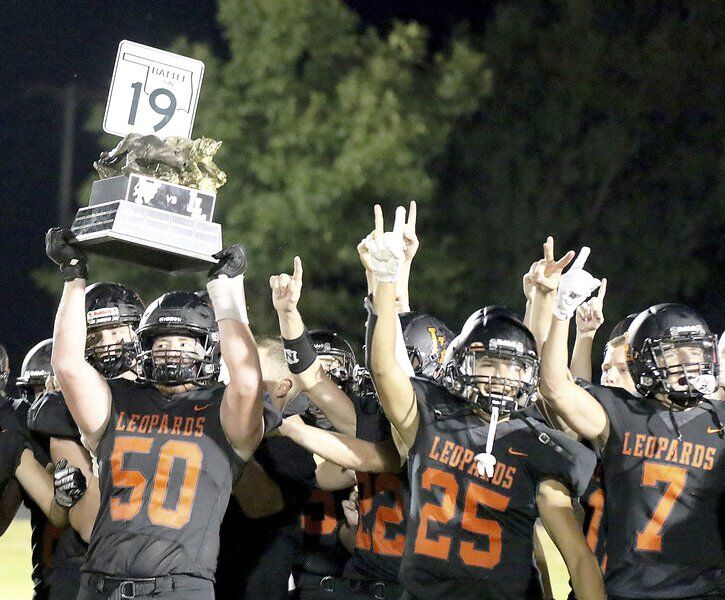 Pauls Valley back Landin Weilenman finds some running room on the outside during Friday’s 20-7 loss to rival Lindsay. (PV Democrat photo by Mike Arie)

In the “Battle on 19”, the Lindsay Leopards used a pair of Cache Barrett touchdown passes to hold off the Pauls Valley Panthers in a 20-7 win. It was both teams’ season opener.

Barrett finished 10-of-14 for 211 yards and touchdown passes of 53 and 41 yards in the win. The Leopard offense finished with 283 total yards.

Pauls Valley’s new offense had some bright spots. Junior quarterback Justin Humphrey rushed for 156 yards and a touchdown and had 9 completions in the passing game. The Panthers finished with 231 total yards.

Pauls Valley started the game with a huge kickoff return by Jon Grimmett out to the mid-field stripe. Lindsay ended that drive with an interception by Bentley Kesler. PV’s defense stepped up and stopped the Leopards forcing a punt. The Panthers got the ball back on their own 15-yard line.

Humphrey got the call on first down keeping the the ball in an RPO going 85 yards for a touchdown and an early 7-0 lead.

Lindsay responded on their next possession. Broty Ramming made a good cut on a post pattern and Barrett hit him in stride, going 55 yards of a touchdown and a 7-7 tie.

Pauls Valley’s defense came up big late in the first quarter and into the second quarter with a goal-line stand. Lindsay had a first-and-goal at the 5-yard line. They moved down to the one, but a play in the backfield by the Panther defense stopped a fourth-down run giving PV the ball at the 3-yard line.

Pauls Valley put together a 19-play drive late in the first half that consumed over six minutes off the clock. The Panthers appeared to score on a 5-yard pass from Humphrey to Mason Prince late in the drive. A holding penalty negated the touchdown.

Pauls Valley had two more chances but Humphrey couldn’t connect with a receiver and PV settled for a 30-yard field goal attempt. The Juan Pablo Amaya kick had enough distance but just missed to the left of the upright and the two teams went to the locker room tied at 7-7.

The Leopards opened the second half with a 68-yard scoring drive. Lindsay used a mixture of runs and passes to move down the field. Jakub Vaughn capped off the 7-play drive with a 3-yard run and a 14-7 lead.

Pauls Valley’s defense made another stop inside the 10-yard line early in the fourth quarter keeping the margin at one score.

Lindsay’s defense stopped the Panthers on three straight runs forcing a punt. Humphrey’s punt pushed Lindsay back to the Panther 41-yard line. On first down, Lindsay went to the air and Barrett hit Kesler on a crossing pattern for a touchdown and a 20-7 lead.

Neither offense could get anything going late and Lindsay finished the “Battle on 19” with a two-touchdown win.