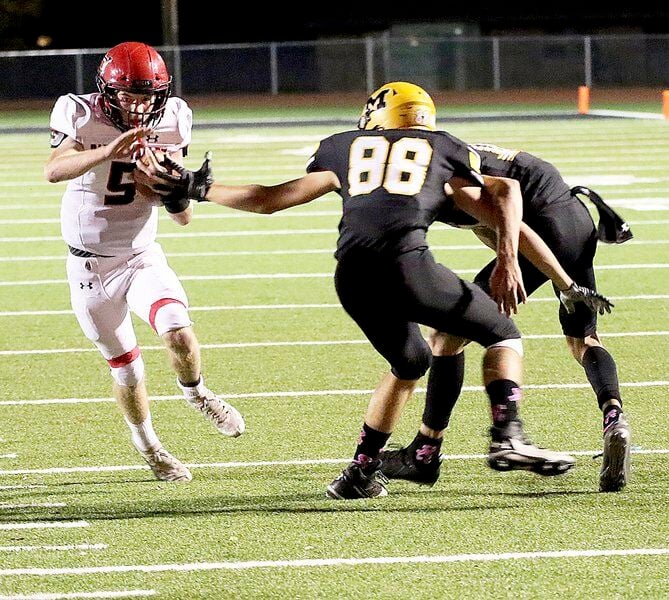 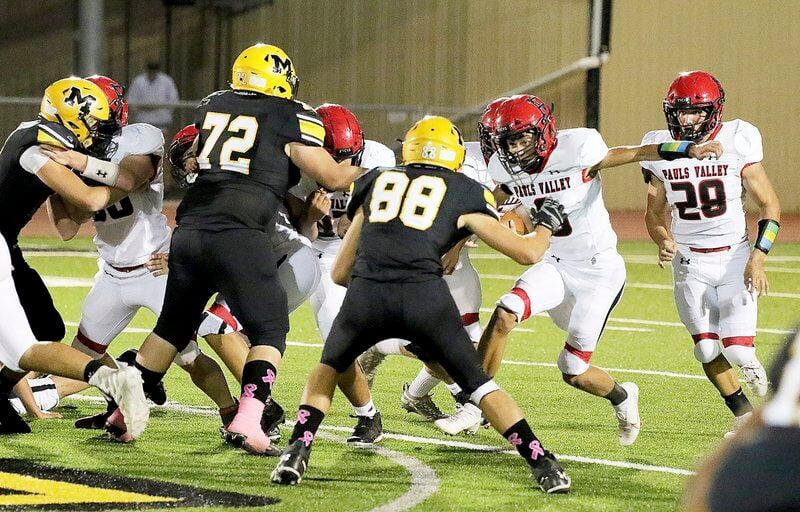 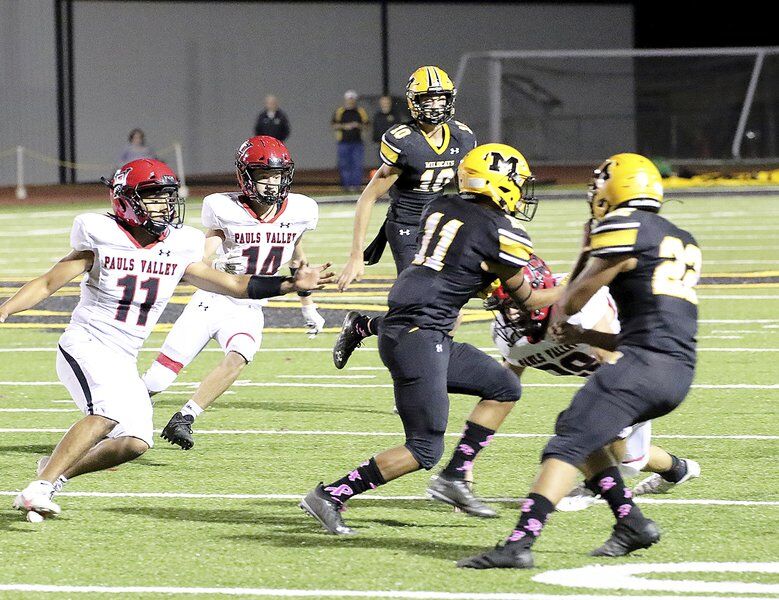 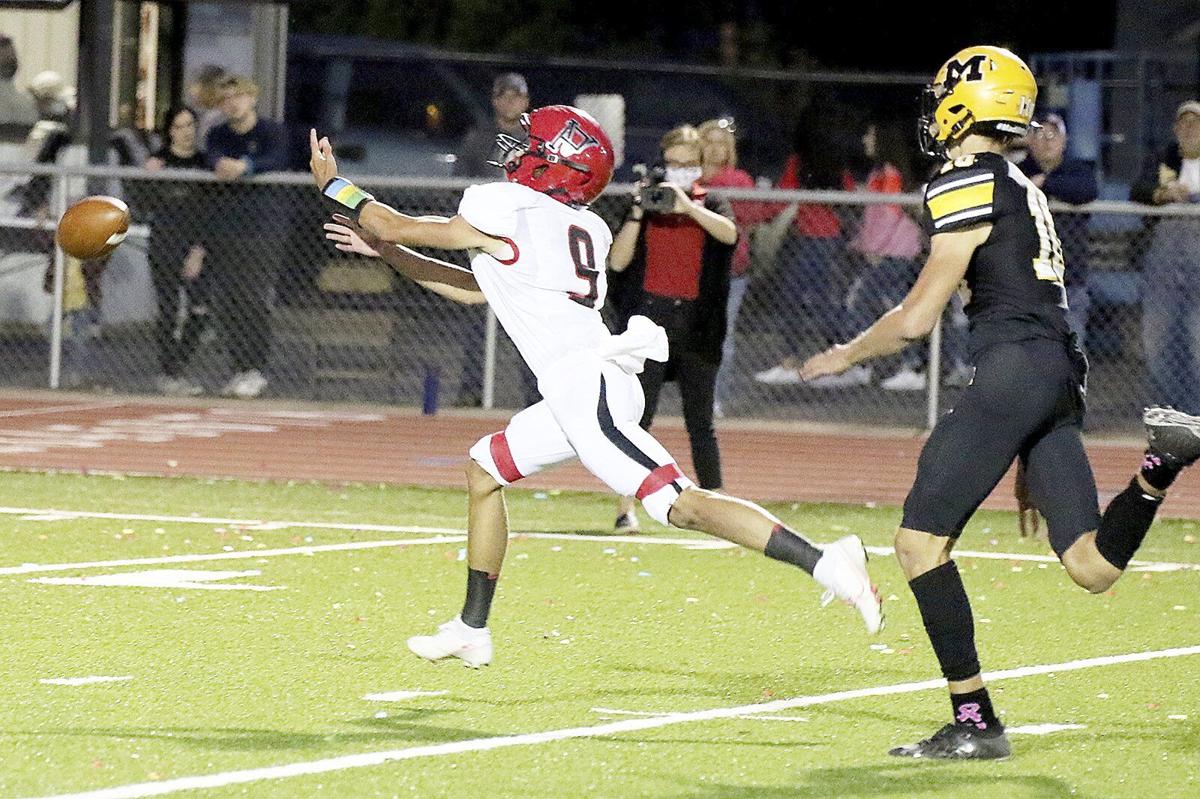 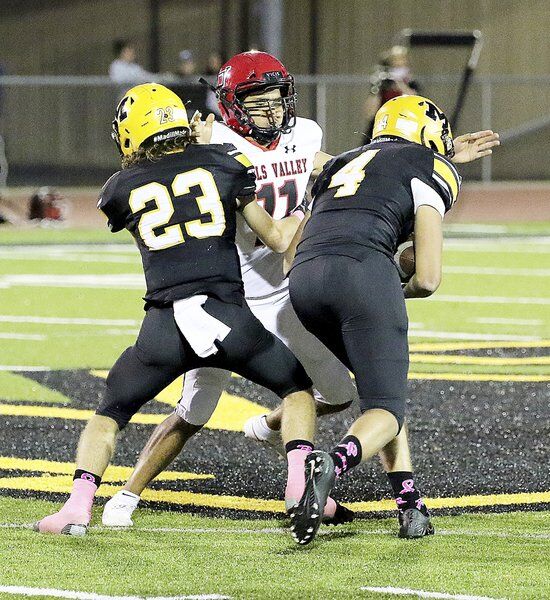 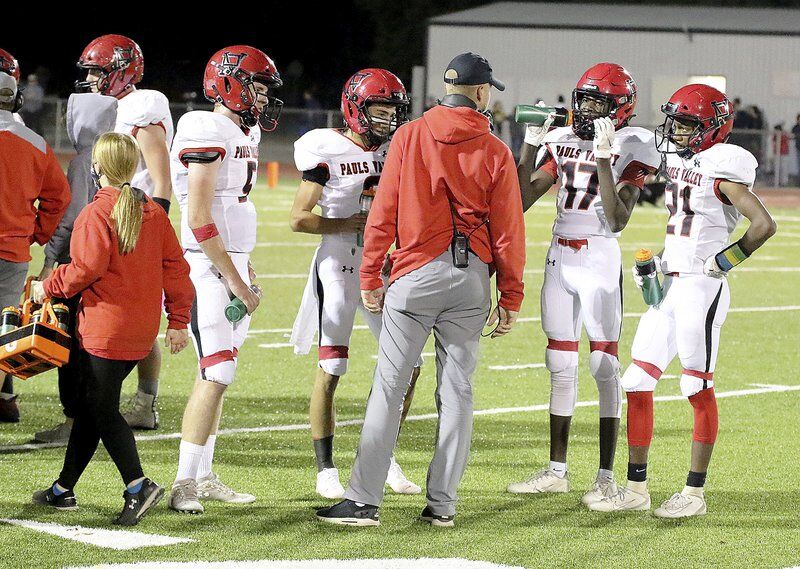 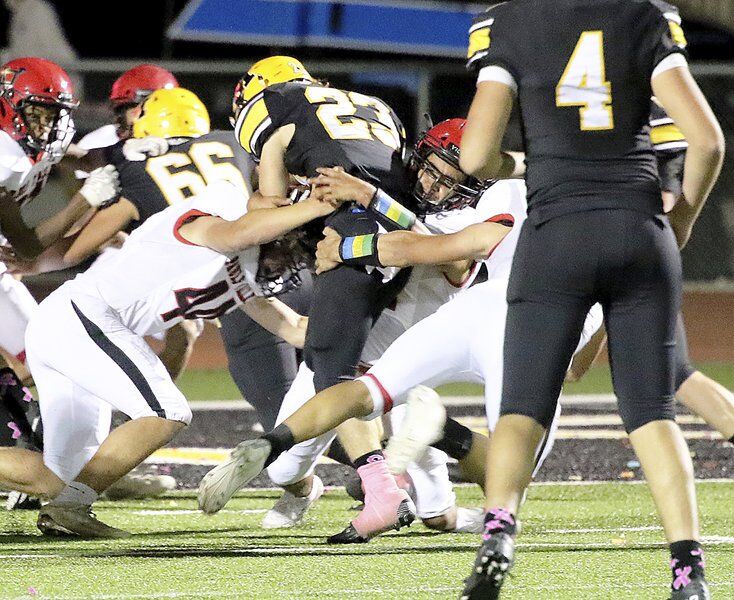 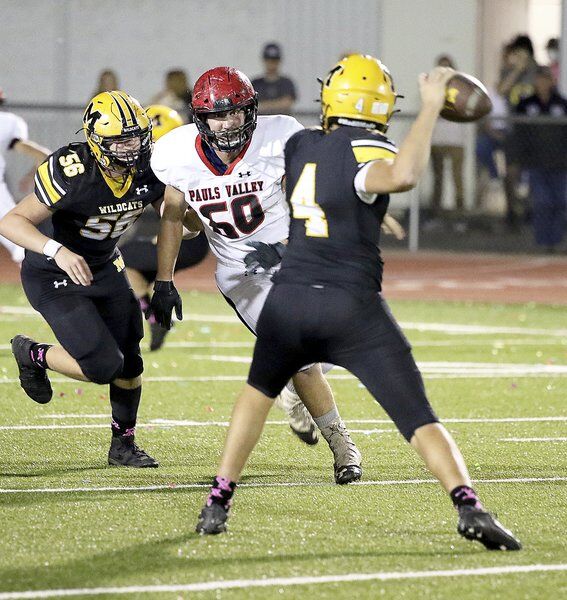 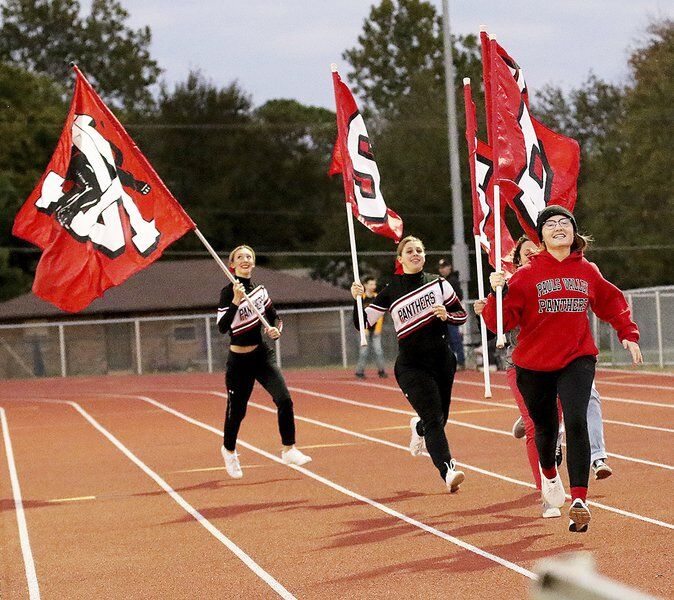 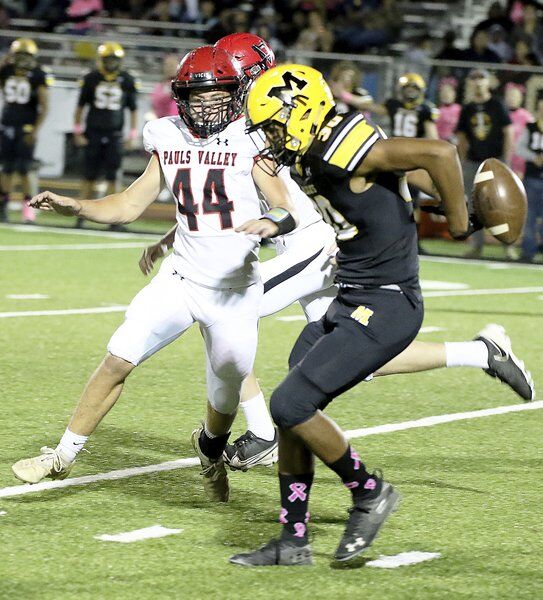 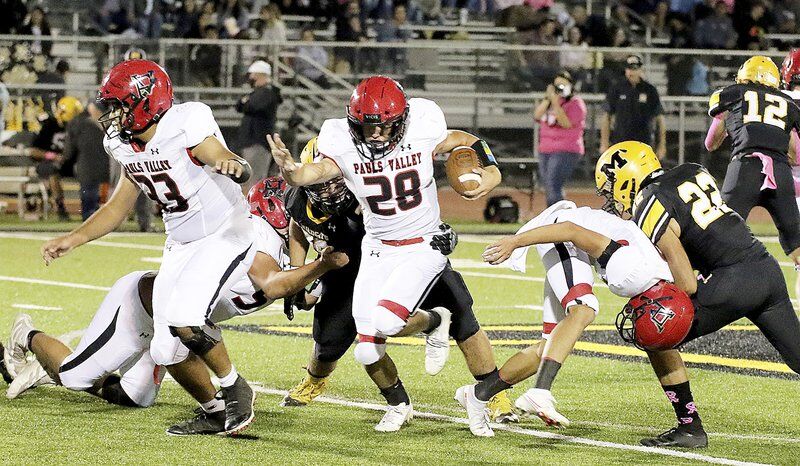 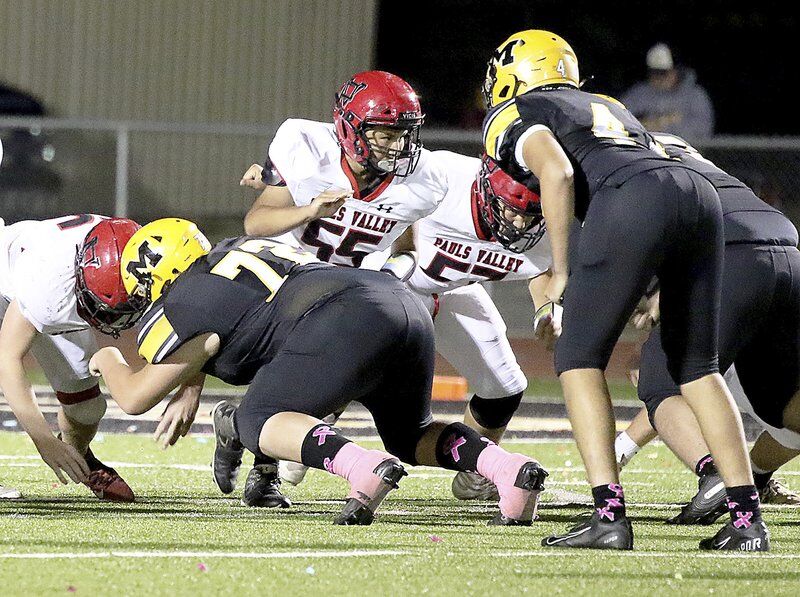 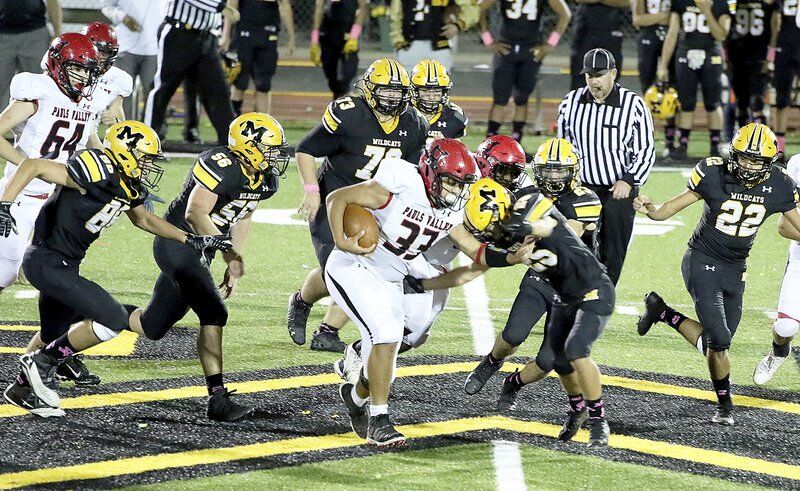 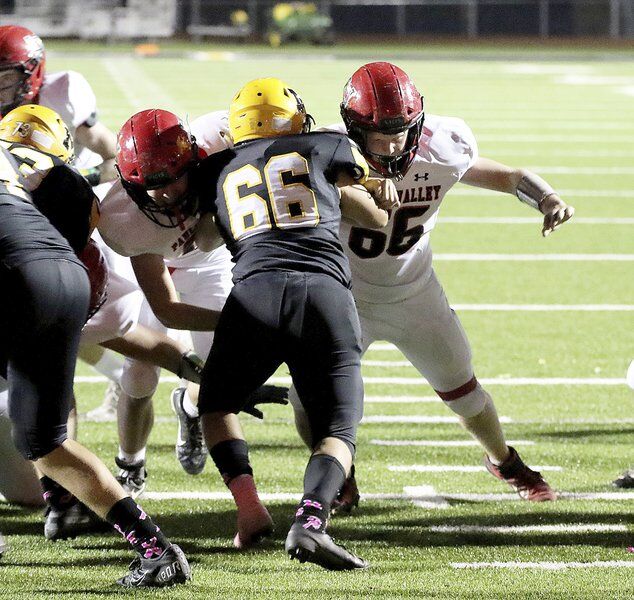 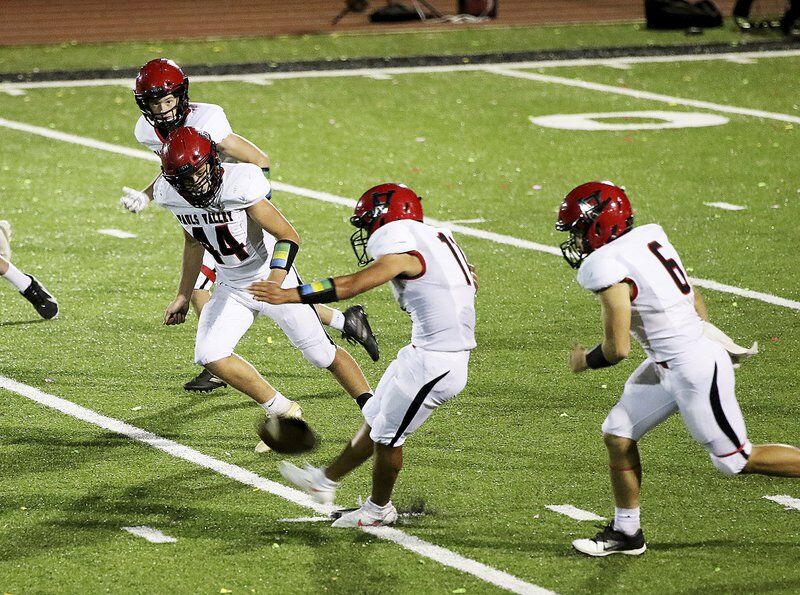 It all came together for the Pauls Valley Panthers in a rare Thursday night matchup at Madill. The Panther offense was clicking and the PV defense turned in another strong performance and that combination meant bad news for the Wildcats.

“I think we played well in every phase,” head coach Dusty Raper said. “Kickoff coverage and red-zone defense was good all night and they weren't able to move the ball on the ground at all. I think we ran for over 400 yards. Anytime you can play like that you are going to be in good shape.”

Pauls Valley did rush for over 400 yards in the game, 453 yards to be exact on 53 carries. Sophomore quarterback Justin Humphrey had a career night with 371 yards in total offense. He had a career high 278 yards on the ground with three touchdowns and had 93 yards passing with another touchdown.

Landin Weilenman finished with 93 yards, but if not for a couple of offensive holding calls would have had over 120 yards. Isaiah DelToro added 52 yards rushing.

Pauls Valley had their best night of the season through the air with Humphrey finishing with 93 yards on 3-of-9 passing. The biggest pass play came in the second quarter when Humphrey hit Weilenman coming out the backfield with a 49-yard touchdown pass, PV's first of the season.

“I thought our offense played really well,” Raper said. “We were able to move it on the ground and through the air. Anytime you can have the offensive numbers we did, it is all on the offensive line and other backs that aren't carrying the ball and blocking.”

After turning the ball over on downs on their first possession, the Panthers scored on five of their next six possessions. The one possession where they didn't score came as time ran out to end the first half.

In the middle of the first quarter, the Panthers got their ball at their own 18-yard line. Pauls Valley put together a 12-play drive as they moved the ball on the ground all the way down the field. Humphrey and Weilenman got a majority of the carries with Humphrey darting in from 5 yards out for a touchdown.

Madill put together a 12-play drive 70-yard drive for their first TD of the night. Quarterback Kendall Robertson moved the Wildcats down the field, mostly through the air. A 22-yard strike to RJ Morris set up the Wildcats at the Panther one. Robertson carried in from there cutting the PV lead to 14-6.

Pauls Valley made quick work of the 66 yards in front of them after the Madill kickoff. Runs by Chasen Jolley and Humphrey gave PV a first down just across mid-field. Humphrey used play-action as he dropped back and hit a wide open Weilenman in stride 15 yards up the field. Weilenman raced toward the end-zone out running a couple of Madill defenders for a 49-yard strike and a 21-6 lead.

The Panthers got the ball to start the second half. They put together a 12-play 65-yard drive. DelToro and Weilenman got the bulk of the carries in the drive including a two-yard touchdown run by Weilenman at the 6:33 mark of the quarter.

Madill picked up two first downs on their first drive of the second half, but the Panther defense came to life stopping the Wildcats and forcing a punt.

Madill came right back with a 10-play 67-yard scoring drive. On the Wildcats best run of the day, Rey Gomez capped off the drive with a 20-yard touchdown run cutting the lead to 35-13 late in the third quarter.

The two teams exchanged possession throughout the fourth quarter. Pauls Valley's defense stepped up late with Deacon Davidson, Jolley and Humphrey all coming up with pass defends on Madill's final drive. Humphrey knocked down a pass on a fourth-down play in the final seconds in the end zone to keep Madill off the scoreboard.

The Panther defense played well all night. Madill finished with 339 yards, but only 57 of that came on the ground. Robertson finished 28-of-47 for 282 yards. Nick Northcutt had 12 catches for 118 yards and Stephen Sicso had 10 catches for 98 yards.

“I thought we played as well as we have in a while on defense,” Raper said. “We were bend but don't break. We were able to have two big goal line stands at the end of the half and at the end of the game to preserve our 15 district points.”

The Panthers return to Marshall County next week as they travel 8 miles further down the road to Top 10 Kingston. The No. 6 Redskins rallied to beat No. 9 Sulphur 30-26 on the Bulldogs home field Thursday night.

Bobby James Baker of Maysville, Oklahoma was born on May 23, 1932 to Barney Bud Baker and Lucille (Holmes) Baker. He passed from this life on Tuesday, October 20, 2020 in Oklahoma City at the age of 88 years.

From his early years in Maysville, Oklahoma, Jerry Keys began a successful journey into the world of sports. His remarkable football and track accomplishments at both the high school and university levels moved him to understand the positive contributions that sports can make in a young pers…

Ted Heath, 74, died October 17, 2020 at Wolfe Living Center in Harrah after a battle with declining health, COVID-19 and pneumonia.

Cara Del Taylor Collins, 55, of Stratford passed away Wednesday, October 14, 2020 at her home.