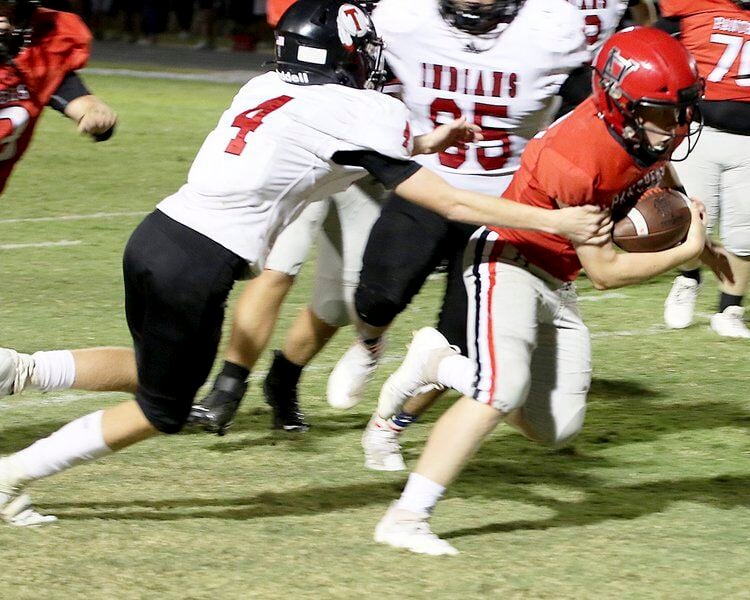 Pauls Valley freshman Tanner Perry runs through a tackle on his way to a first down during Friday's Tishomingo game. (PV Democrat photo by Mike Arie) 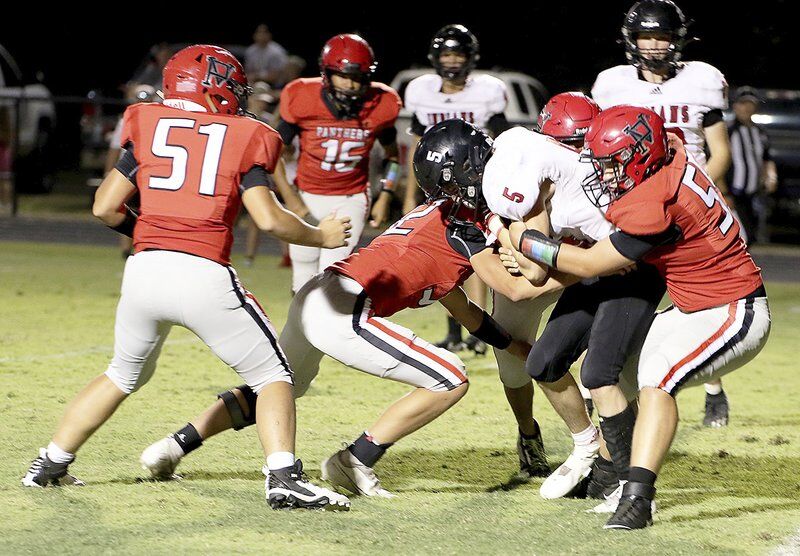 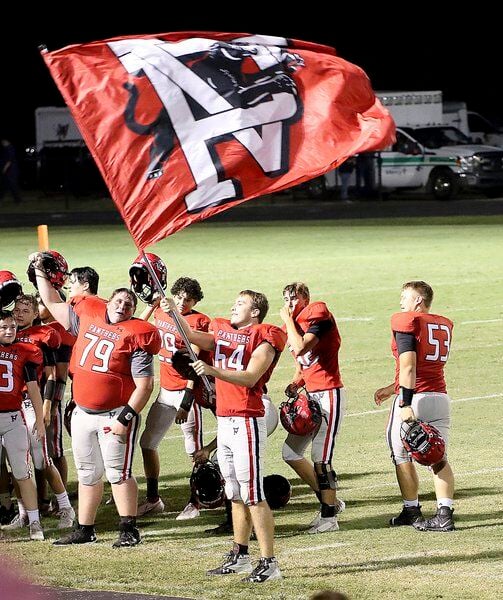 Pauls Valley freshman Tanner Perry runs through a tackle on his way to a first down during Friday's Tishomingo game. (PV Democrat photo by Mike Arie)

It started off as a track meet between Tishomingo and Pauls Valley with the Panthers leading 7-6 two minutes into the game. Pauls Valley kept going on offense and the Panther defense shut down the Indian offense as PV rolled to a 61-14 win Friday night.

“We knew Landin would have a breakout game at some point, he is a really good player,”  head Coach Dusty Raper said. “It has taken the offensive some time to adjust to the new scheme.  Our offensive line has improved tremendously over the last 3 weeks.”

Defensively, Pauls Valley held Tishomingo to 185 total yards, 80 of that coming on their first offensive snap of the game and 65 more coming on a third quarter run for a touchdown.

“I have not seen the defensive stats for the game but I know the ones only gave up one pass play,” Raper said about the defense. “They have been consistently good through the first 3 games.”

Pauls Valley got the ball to open the game and went backwards on their first two plays of the game because of a penalty. Facing a second and eight from the two-yard-line, Weilenman found a crease and out ran the Tishomingo defense 98 yards for a touchdown.

Tishomingo got the ball back and on their first play from the 20-yard-line. Quarterback Tyson Barrett hit Keagn Lafevers on a post pattern and Lafevers went the distance and just over 90 seconds into the game, PV led 7-6.

Over the next 22 minutes it was all Pauls Valley as they scored 42 straight points for a 49-6 halftime lead.

Weilenman scored his second touchdown of the game on the Panthers next possession. The senior back capped off a 9-play 69 yard drive with a 3-yard touchdown run.

The Panthers leading rusher coming into the game, sophomore quarterback Justin Humphrey, capped off a 50-yard four-play drive with a 2-yard touchdown run.

The defense got on the scoreboard for the Panthers late in the first quarter as TK Jaggers picked off a #3 pass returning it 32 yards for a touchdown and a 28-6 lead at the end of the first quarter.

Pauls Valley recovered a Tishomingo fumble to start their next possession. PV went 24 yards on 7 plays for the score. Humphrey threw his first touchdown pass of the season hooking up with Jaggers from 6 yards out for the score.

A short punt on Tishomingo’s next possession gave PV great field position at the Indian 30. PV took three play to get into the endzone as freshman Noah Olguin darted in from 5-yards out for his first varsity touchdown.

Pauls Valley sat their starters after opening up a 42-6 lead giving the bench players some time on the field beginning mid way through the second quarter.

Freshman Tanner Perry guided the Panthers down the field to a score on his varsity debut under center. Perry had four carries in the 6-play 42-yard drive that ended with Perry bulling his way into the end zone from a yard out for his first varsity touchdown as PV took a 49-6 lead at the break.

Tish started the second half with the football and went 80 yards on 5-plays for their second score of the night. Justin Cardenas went 65 yards on a second down run for the touchdown as Tish cut the score to 49-14.

Pauls Valley was driving on their first possession of the second half. They got inside the Tish 20 when they fumbled and the indians recovered at their onw 10-yard-line.

The defense came up big as Parker Green picked off a Tish pass returning it 22 yards for a touchdown and a 55-14 lead.

Pauls Valley would use a 9-play drive in the fourth quarter to chew up over six minutes off the clock before Perry scored his second touchdown of the night on a 10-yard run.

The Panthers would force a Tish fumble and recover it with three minutes left in the game and they ran out the time for a 61-14 win.

“I thought our backups came in and did an outstanding job,” Raper said.  “They continued to move the football consistently and were getting stops on defense.

“Our backups are playing well in JV games and it showed Friday night when they got their chance.  We are starting to build some depth.”

Pauls Valley’s varsity team is off this week as they prepare of district action starting next week at Lone Grove.