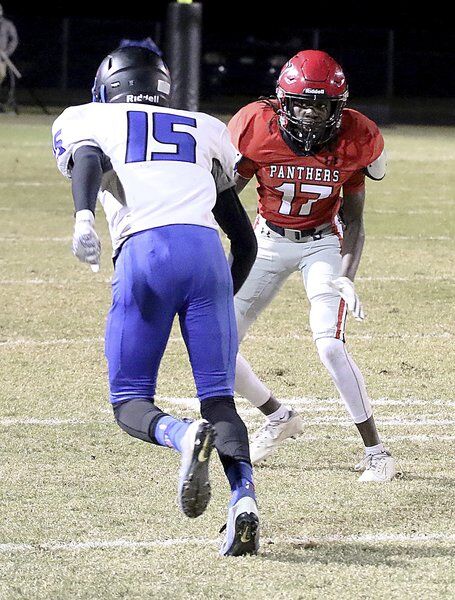 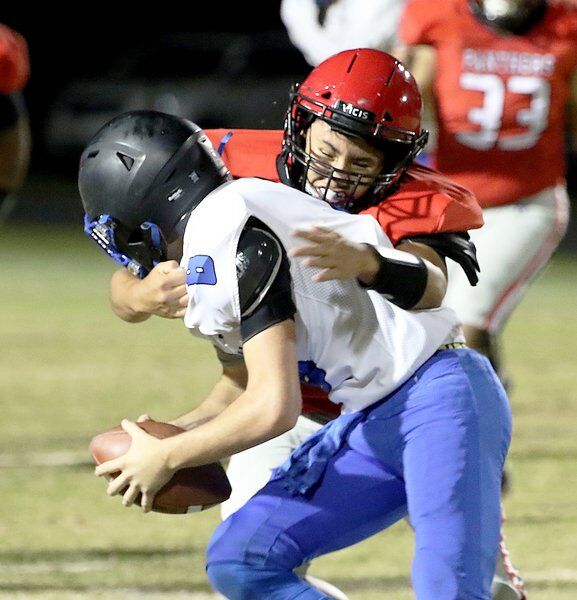 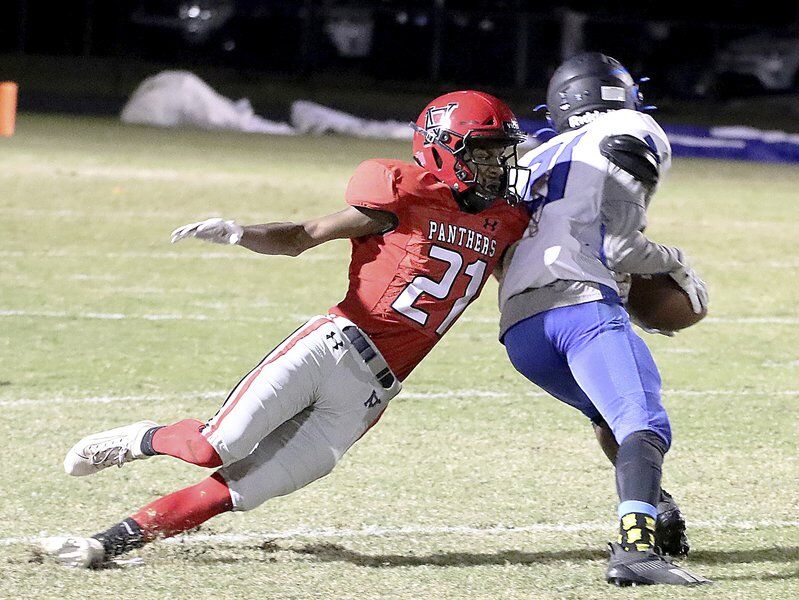 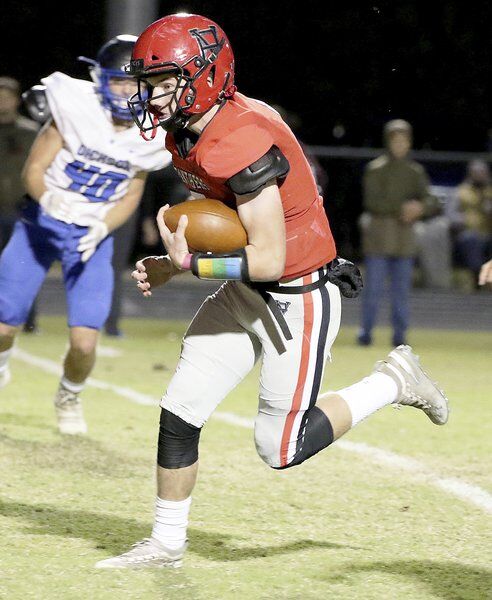 Pauls Valley quarterback Justin Humphrey seeks out the end zone during action with Dickson this past week. (PV Democrat photo by Mike Arie) 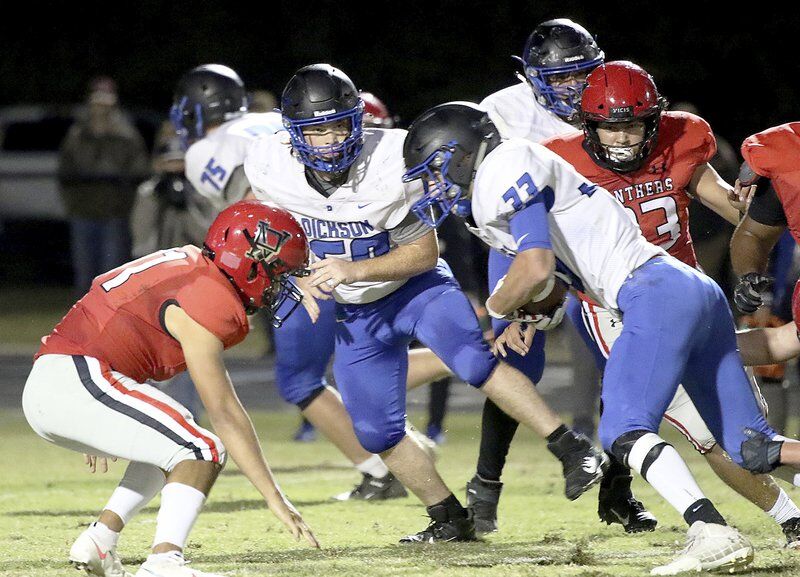 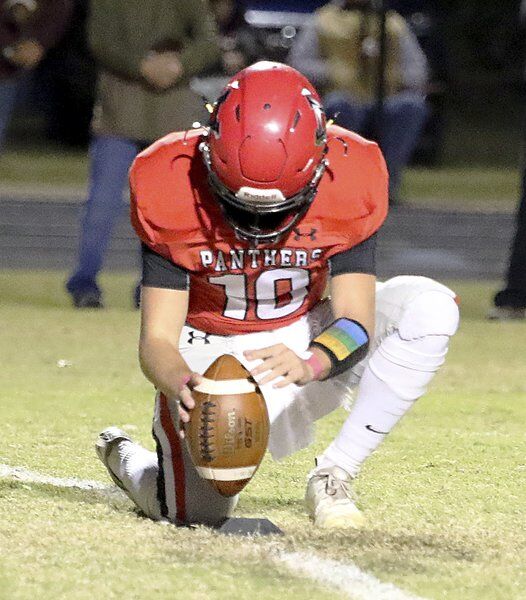 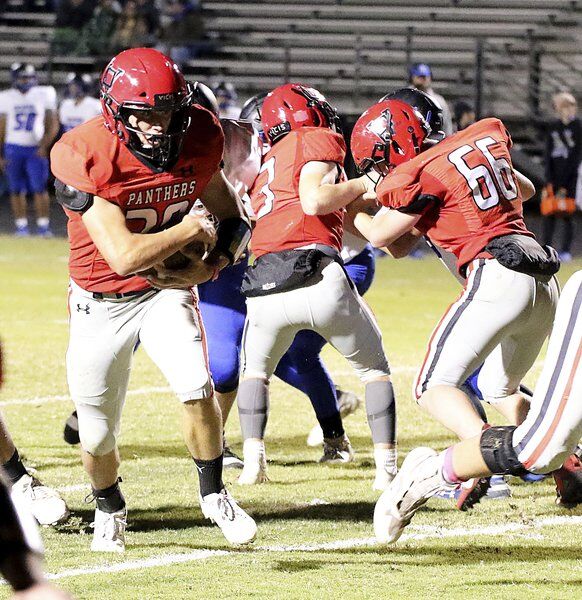 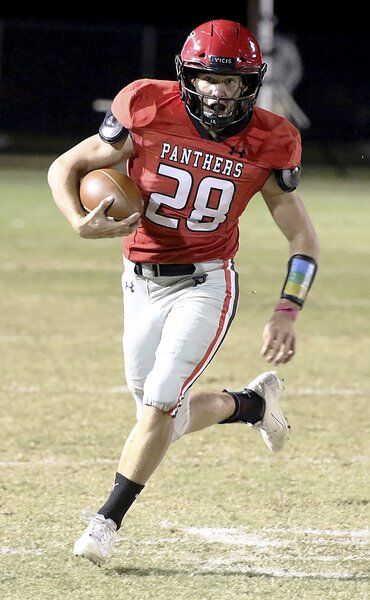 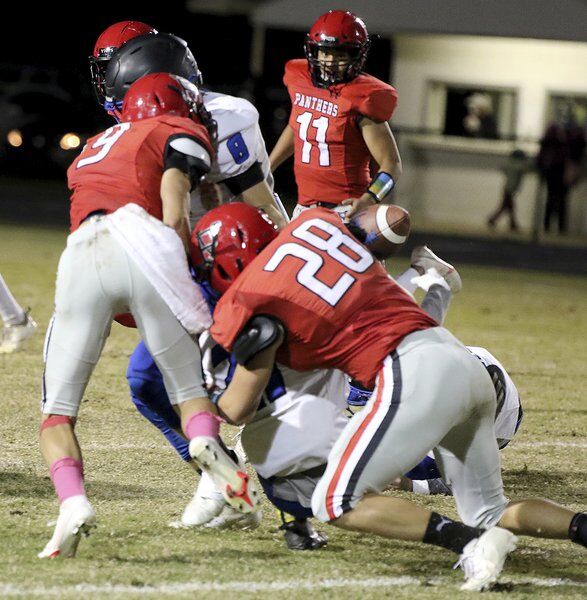 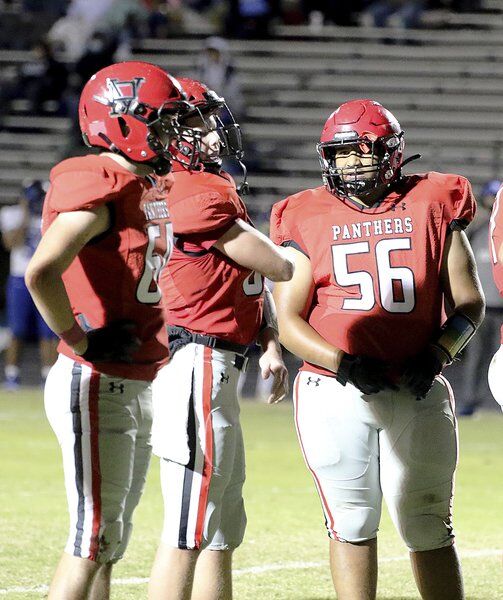 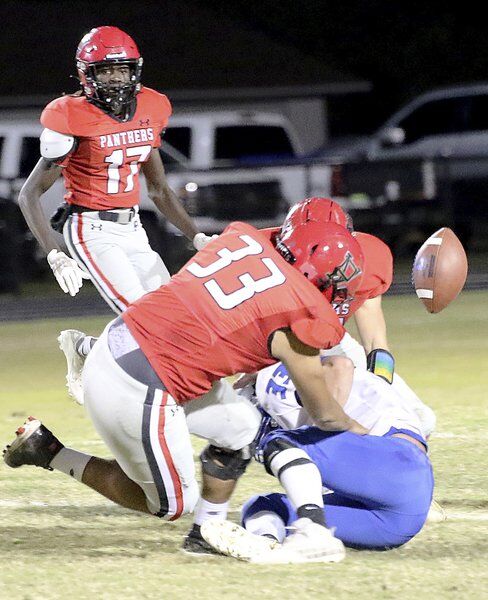 Pauls Valley quarterback Justin Humphrey seeks out the end zone during action with Dickson this past week. (PV Democrat photo by Mike Arie)

Justin Humphrey surpassed the 1,000 yard mark passing and had his best night throwing the ball in leading the Pauls Valley Panthers to a 41-6 win over Dickson in a Class 3A-2 battle.

Humphrey rushed for 180 yards and four touchdowns, all in the first half, and now has 1,147 yards and 18 touchdowns. He was 5-of-7 passing for 94 yards with an interception.

Mason Smith’s 36-yard acrobatic catch in the second quarter made the ESPN Top 10 plays and was also KTEN’s No. 1 play of the week. Smith had to climb a ladder on the catch jumping up to make a two-handed catch with extended arms and then held onto the ball as he came down hard on his back.

“Our offense played pretty well except for the 2 turnovers,” head coach Dusty Raper said. “We went into the game trying to work on our passing game. It has improved a bunch the last few weeks.

“Starting with the Sulphur game Mason Smith has emerged as a pass catching threat. Chasen Jolley and Gunner Derryberry have helped the passing game as well.”

The Panther defense forced four turnovers on the night and held Dickson to 185 total yards. The Comets scored late in the game to avoid the shutout.

“Defense played really well,” Raper said. “ We were able to keep them out of the end zone until the last few minutes of the game.”

Pauls Valley started the game with the football. Landin Weilenman carried PV down the fields on runs of 17 and 11 yards and a reception of 16 yards. Facing a third-and-6, Humphrey found a hole in the defense going 15 yards on his first carry for a touchdown.

Dickson had a good drive going as they crossed mid-field but the drive stalled out and they punted the ball back to the Panthers.

Pauls Valley moved quickly down the field going 80 yards in five plays. Humphrey started off the drive with a 24-yard run and finished up the drive with a 30-yard touchdown run and a 14-0 lead.

Pauls Valley caused a fumble on the Comets next possession and that led to a four-play 57-yard drive. Humphrey had runs of 14 and 19 yards to set up Weilenman’s 9-yard touchdown run minute into the second quarter.

Dickson put together another good drive moving into Panther territory for a second time in the game. The 12-play drive moved the ball down to the Panther 22 before Pauls Valley got the momentum stopped forcing a turnover on downs at the 25-yard line.

Dickson forced their second turnover of the game four plays later giving them their best starting field position of the night at their own 46-yard line.

Dickson couldn’t get anything going and Chasen Jolley recovered a Comet fumble at the Panther 48-yard line with just over two minutes remaining.

PV made quick work of the 52 yards. A 21-yard pass to Gunner Derryberry followed by a 13-yard pass to Jolley helped set up Humphrey’s 13-yard touchdown run and a 28-0 lead.

Pauls Valley got the ball back late in the half at their own 40-yard line. A 15-yard run by Humphrey followed by a 36-yard pass and great catch by Smith set up the Panthers at their 9-yard line. Humphrey darted in from 9 yards out in the final seconds for a 35-0 halftime lead.

The Panthers opened up the second half with Humphrey on the bench and Smith running the team. Smith guided the Panthers down the field on a 61-yard, 9-play drive that ended with Smith powering his way in from a yard out for the score.

Late in the game, Dickson quarterback Jack McDonald scored on an 8-yard touchdown run to keep his team from being shut out.

McDonald led the Comets with 52 yards on the night. Kameron Helm added 50 yards and Jzavionn Bennett had 41 yards on the ground and 23 yards receiving.