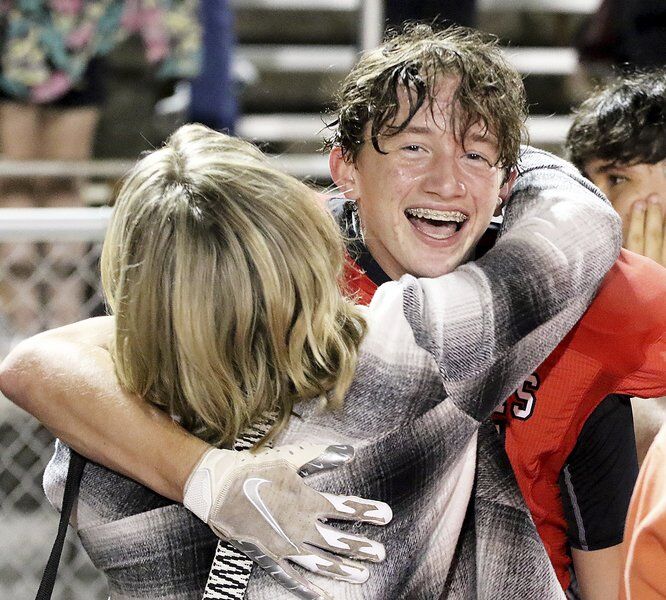 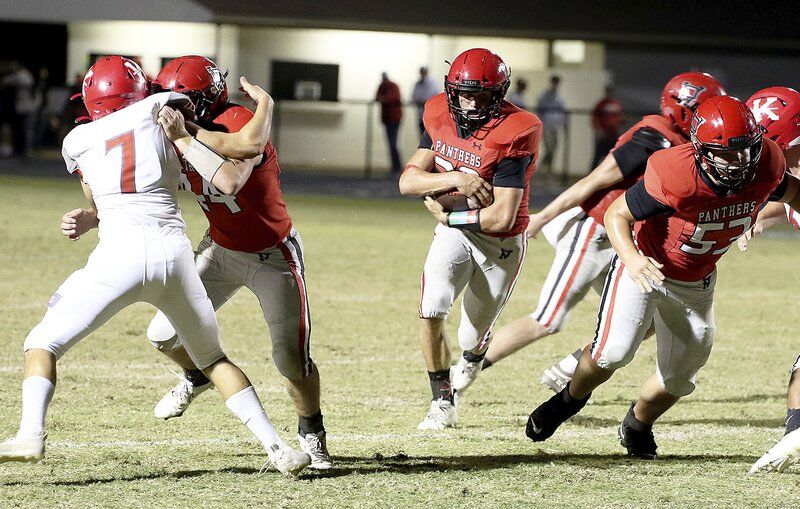 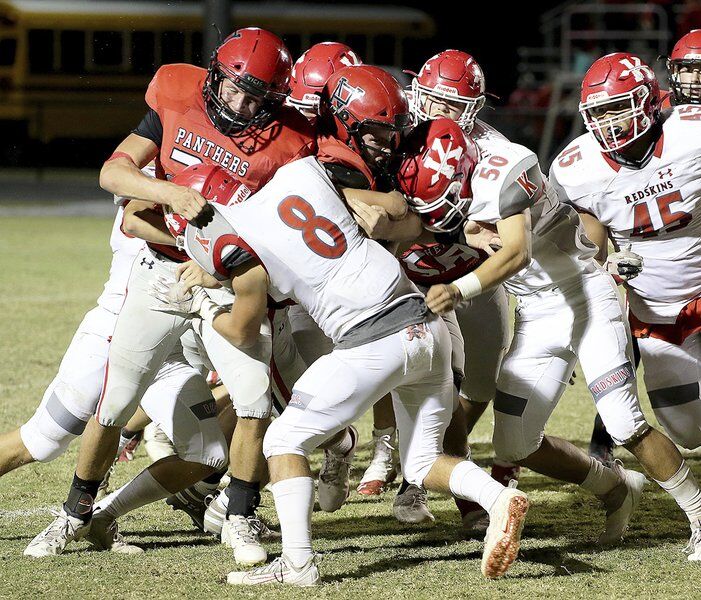 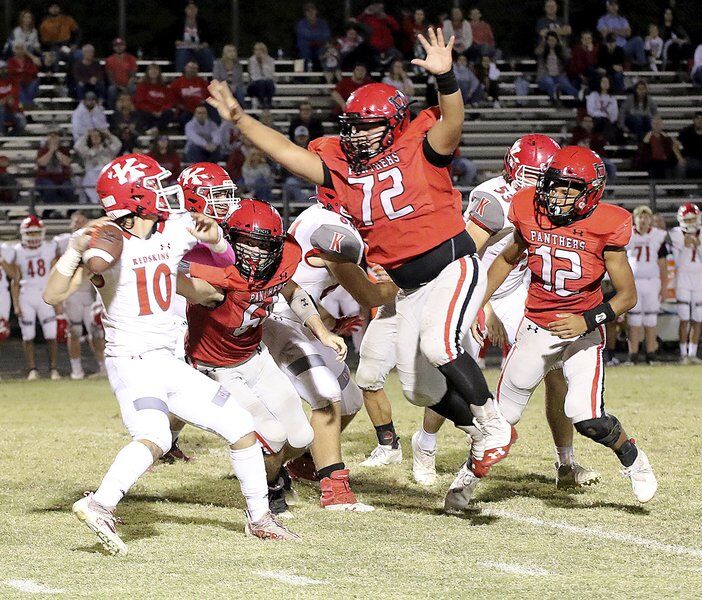 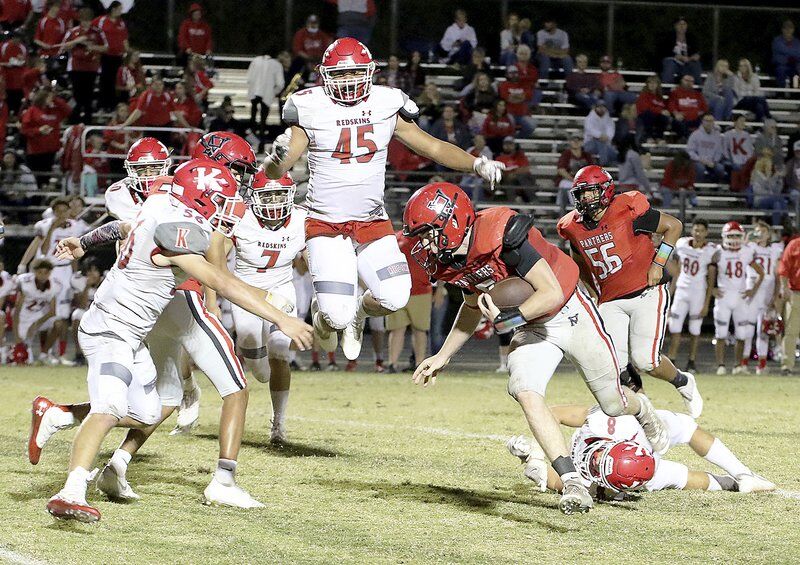 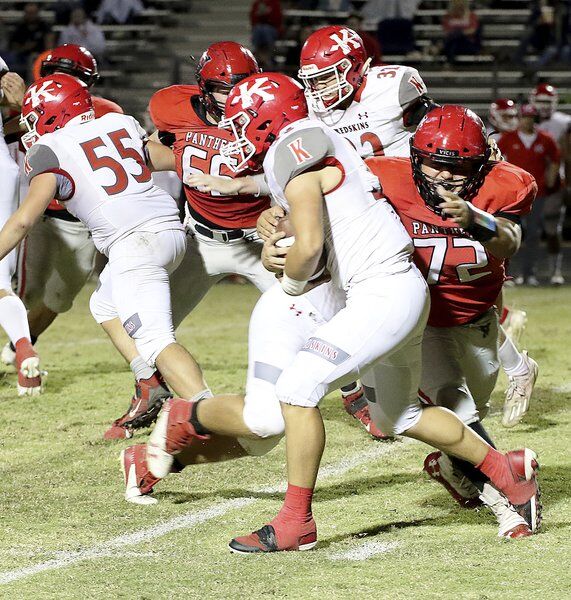 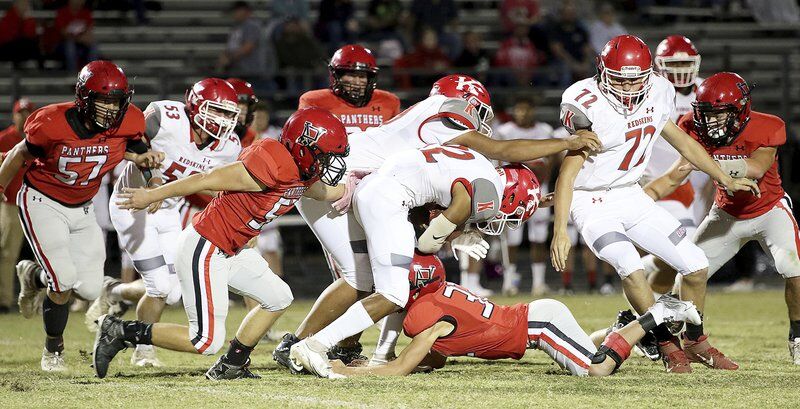 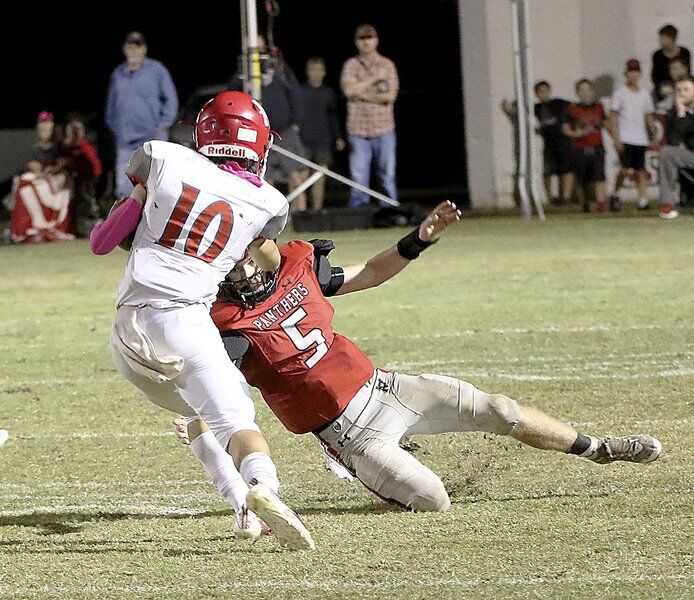 The Pauls Valley Panthers went back-and-forth on the scoreboard Friday night with the Kingston Redskins in a key 3A-2 game Friday night.. Pauls Valley took the lead with 3:12 left in the game and then had to hold on with Jackson Coates intercepting a pass in the end zone with a minute left to help secure a 35-28 win.

"This was a great overall team win," Pauls Valley head coach Dusty Raper said. "The biggest win we have had this year. I felt our defense played really well like they have all year. Our special teams were not as sharp they have been for most of the season and that put our defense in some tough situations."

Pauls Valley had a huge night on the ground offensively with 272 yards. They added 121 through the air to finish with 392 total.

Junior quarterback Justin Humphrey finished with 265 total yards and was a part of five touchdowns. He had 144 yards on the ground on 23 carries with touchdown runs of 21, 9, 1 and 2 yards. He was 6-of-9 passing for 121 yards passing with a 25 yard touchdown pass. Maddex Prince had 3 catches for 39 yards.

Senior running back Landin Weilenman also had a big night finishing with 128 on the ground and also added a 25 yards touchdown catch.

With the win Pauls Valley is sitting in fourth place in the district behind Sulphur, Lone Grove and Plainview.

"We are trying not to pay too much attention to district standings right now," Raper said. "Since the Sulphur game we have decided to treat every game as a must win and not worry about anything else."

Pauls Valley opened the game with the football and went to the air on their first play from scrimmage. Humphrey hit Nathan Chronister with a 24-yard pass that carried PV into Kingston territory. Pauls Valley went to their ground game and three plays later Humphrey was in the end zone after a 21-yard touchdown run for a 6-0 lead.

The Panther defense forced a three-and-out on their first possession but a muffed punt was recovered by Kingston at the Panther 20-yard-line. It took Kingston one play to hit paydirt as quarterback Klete Finley hit Chandler Hansley with a pass for a touchdown and a 7-6 lead.

The Panthers got the ball back on the ensuing kickoff. PV went to the air on first down with Humphrey hitting Maddex Prince for 18 yards. Weilenman had back-to-back carries of 29 and 26 yards pushing the Panthers into the redzone. After a short run by Weilenman to the 9-yard-line, Humphrey capped off the drive with a 9-yard touchdown run and a 13-7 lead.

Kingston came right back as they featured their running game. Four different backs carried the ball down the field for the Redskins, with Brandon Watson going 32 yards for the touchdown and a 14-13 lead.

The Panthers started the second quarter with a 33-yard pass from Humphrey to Jon Grimmett that moved PV into Kingston territory. Another fourth down conversion, this time via an offsides by Kingston on the hard count kept the drive alive.

On first down from the 19, Weilenman went 18 yards and just missed out on a touchdown as he was knocked out of bounds. Humphrey went in from there as PV took a 19-14 lead.

After a 19-yard run by Watson, Finley hit Braden Matchen for a 16-yard touchdown giving Kingston a 21-19 lead.

With 2:43 left in the half and 75 yards between them in the end zone, Pauls Valley went to work. Weilenman and Humphrey carried PV for a first down and a 39-yard run by Humphrey gave PV a first-down at the Kingston 26-yard-line.

A third-down pass to Maddex Prince for 10 yards gave PV a first down at the Kingston 15. Pauls Valley went to their playbook and a halfback pass by Weilenman back to Humphrey went for a touchdown but a holding penalty negated the pass and pushed PV back to the 25.

With time running out in the half, Pauls Valley went to the air again this time with Humphrey throwing to Weilenman and the senior would not be denied crossing the goalline with six seconds remaining in the half for a 25-20 lead.

After a wild first half where both teams had five possessions, the second half started with each team having the ball once in the third quarter.

Kingston started the half with a 12-play, 74-yard drive. They chewed up half of the third quarter clock before Watson carried the ball in from two-yards out to give Kingston a 28-25 lead.

Pauls Valley chewed up the final six minutes of the quarter with a 10-play drive moving the ball from their own 32-yard line to the Kingston 26. Weilenman and Humphrey carried PV down the field and into the final quarter.

The Kingston defense came up big to start the fourth quarter forcing a turnover on downs.

The Panthers returned the favor as Watson fumbled and Grimmett pounced on the ball at the Redskin's 48-yard line.

Pauls Valley went to the air on first down and Devin Tipton stepped in front of a Humphrey pass for a Kingston interception at the 13-yard-line.

Pauls Valley's defense came up with a huge stop forcing a three-and-out. Kingston lined up to punt and the center snapped the ball over the head of the punter and into the end zone. Watson covered up the ball in the end zone for a safety as PV cut the lead to 28-27.

Pauls Valley got the ball back at the Kingston 42-yard line after a Dakota Weatherford fair catch with 8 minutes left in the fourth quarter.

The Panthers moved down the field picking up a huge first down on a fourth down pass from Humphrey to Maddex Prince for 11 yards to the Kingston 25. Weilenman gave PV a first down at the Kingston 12 with a strong run. Humphrey carried the ball three straight times with his last carry of two yards going for a touchdown and a 35-28 lead after a Weilenman two-point run.

Kingston got the ball back a their own 30-yard-line with three minutes left in regulation.

Kingston moved down the field on the back of Finely. The junior had a 12-yard run on third down to midfield for a first down and then a 20-yard fourth down run for a first down to the Panther 22-yard line.

With 90 seconds left in the game Finley hit Matchen with a 10-yard pass to the 12-yard-line. Finely went to the end zone on the next play and the ball went through the hands of his receiver and into the hands of Jackson Coates, seven yards deep in the end zone. Coates took off with the ball up the Panther side lines returning the ball 44 yards to the Kingston 37 and sealing the Panthers victory.

"Dickson is a well coached football team," Raper said. "They have been close in several games. They had the lead until really late against Madill, who in my opinion is a playoff football team.

"They run the Wing-T which is something we have not seen this year and are going to have to be sound on defense and protect the football on offense to win this one."