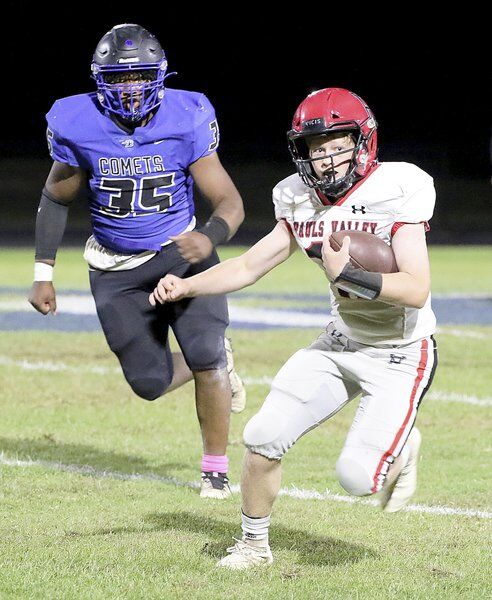 Pauls Valley's Tanner Perry turns up field looking for yardage after a catch during the Panthers win at Dickson Friday. (PV Democrat photo by Mike Arie). 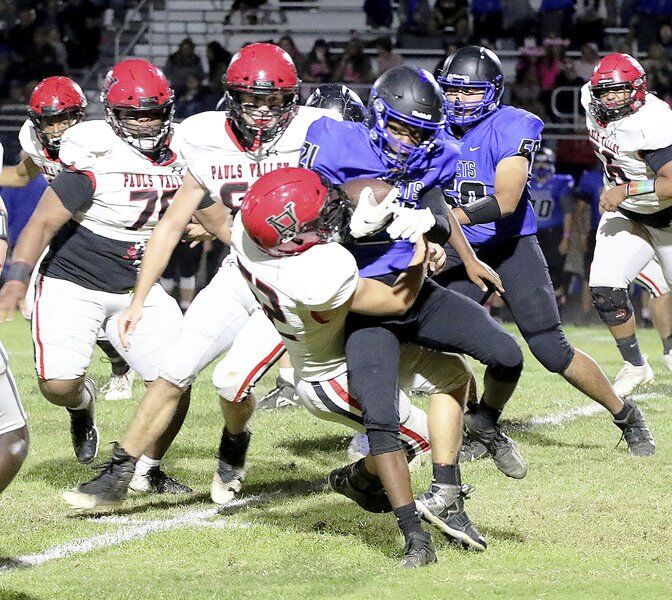 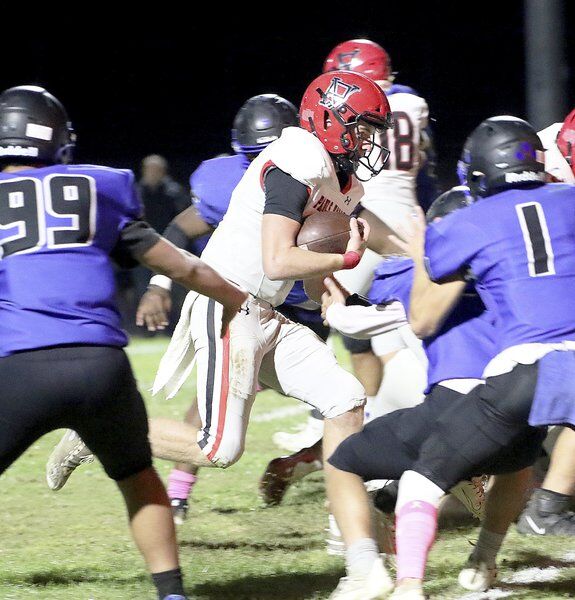 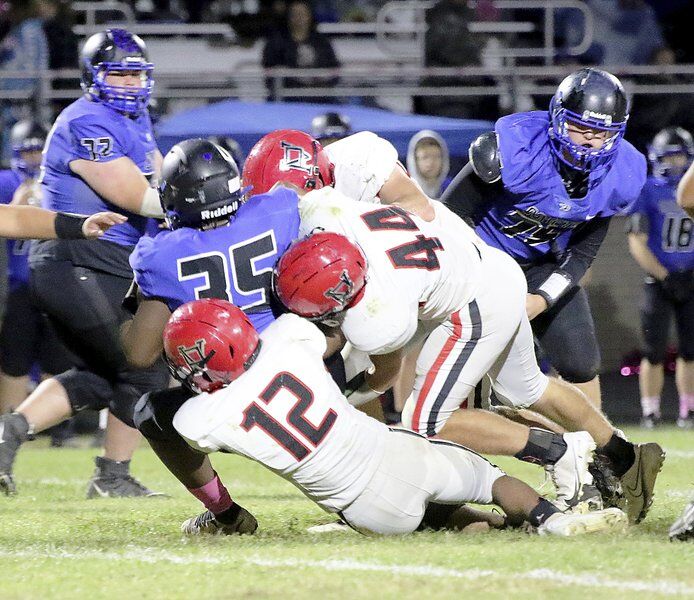 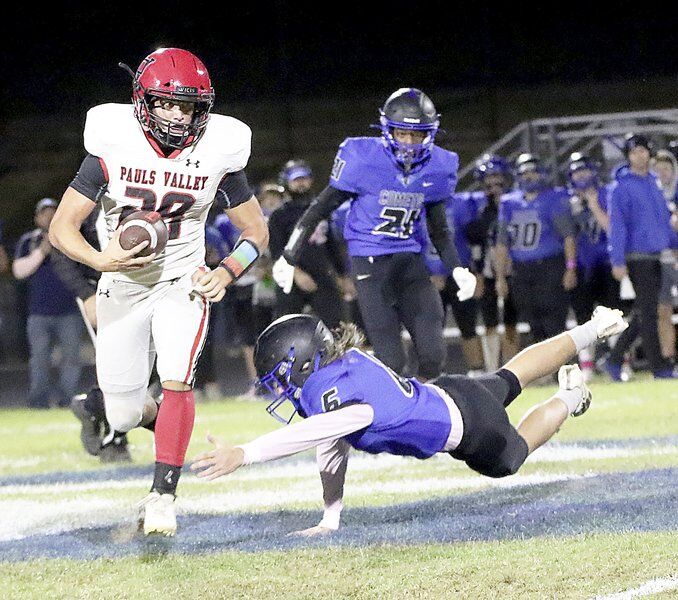 Landin Weilenman avoids a tackle as he races up field during Pauls Valley's win over Dickson Friday. (PV Democrat photo by Mike Arie) 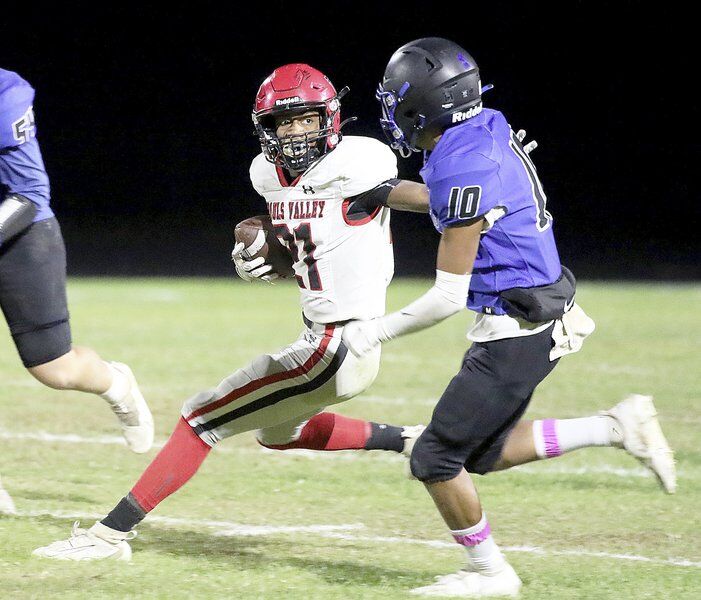 Pauls Valley's Tanner Perry turns up field looking for yardage after a catch during the Panthers win at Dickson Friday. (PV Democrat photo by Mike Arie).

Landin Weilenman avoids a tackle as he races up field during Pauls Valley's win over Dickson Friday. (PV Democrat photo by Mike Arie)

For the second straight week, the Pauls Valley Panthers had two backs rush for over 100 yards extending their win streak to three with a 42-14 win over the Dickson Comets.

The defense limited Dickson to 286 yards, 217 of that on the ground. Christian Cotton led the Comet offense with 113 yards and a touchdown.

It didn't take long for the Panthers to get on the scoreboard. After Nathan Chronister recovered a short kick at the Panther 43, Pauls Valley went to the air on first down and almost scored on a Justin Humphrey pass to Maddex Prince. On second down, Weilenman got his first carry of the game going 57 yards for a touchdown and a 6-0 lead.

On the Panthers next possession, Weilenman had carries of 35 and 31 yards scoring on his third carry of the night from 31 yards out for a 12-0 lead. Weilenamn had three carries in the first five minutes of the game for 123 yards and two touchdowns.

The Panthers were on the move late in the first quarter but a PV fumble at the Dickson 20 was recovered by Dickson's Johnny Smith ending the potential score.

Dickson put together a 12-play drive that moved them inside the Pauls Valley 20-yard line. The drive ended with Cason Taylor recovering a Dickson fumble at the 22-yard line.

The Panthers moved quickly down the field. An 11-yard run by Humphrey, an 11- yard pass to Tanner Perry and a 15-yard penalty aided the drive. Weilenman capped off the drive with a 28-yard touchdown run an an 18-0 lead.

Dickson answered with a scoring drive of their own that was capped off with Tanner Stewart hitting Cooper Shelley with a 28-yard touchdown pass that cut the lead to 18-6 at the break.

Pauls Valley kicked off to start the second half and Noah Olguin recovered a Dickson fumble giving PV the ball at the PV 26-yard-line.

Humphrey hit Weilenman with a 24-yard pass on first down carrying PV down the the two. Two plays later Humphrey scored his first touchdown of the night on a one-yard run for a 26-6 lead after a Perry conversion run.

The Panther defense forced a turn over on downs at the own 25-yard line. Humphrey got loose on a second down carry going 73-yards for a touchdown an a 34-6 lead after Weilenman's conversion run.

Pauls Valley scored their final touchdown early in the fourth quarter. After forcing a punt, Humphrey had two big passes a 21-yard completion to TK Jaggers and a 30-yard completion to Maddex Prince set up a Humphrey one-yard TD run. A conversion pass to Chronister gave PV a 42-6 lead.

Dickson responded on their next possession with a five-yard touchdown run by Cotton.

Pauls Valley ran out the final 6:35 of the game for their fifth win of the season.

Pauls Valley will be at home for their final regular season game as they host Plainview.

Plainview is tied atop of the 3A-2 district with Lone Grove and Sulphur all with 5-1 records. The Panthers are alone in fourth place with a 4-2 record.