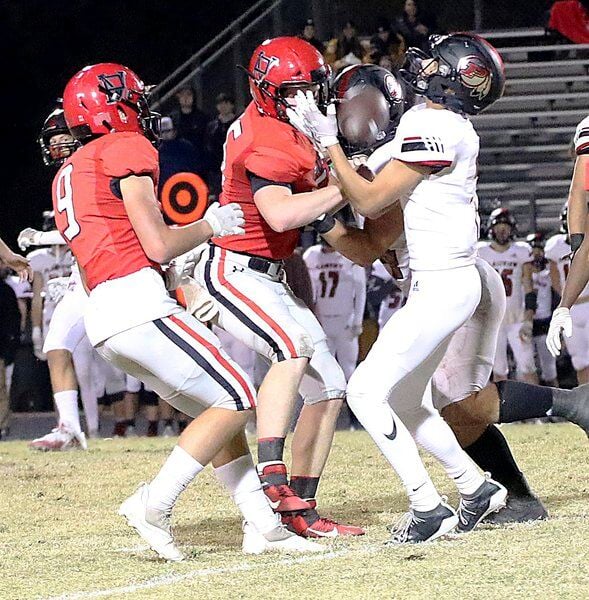 Pauls Valley's Mason Smith (#9) and Cole Campbell are in the face of Plainvew punt returner as he makes a catch during Friday's regular season finale. (PV Democrat photo by Mike Arie) 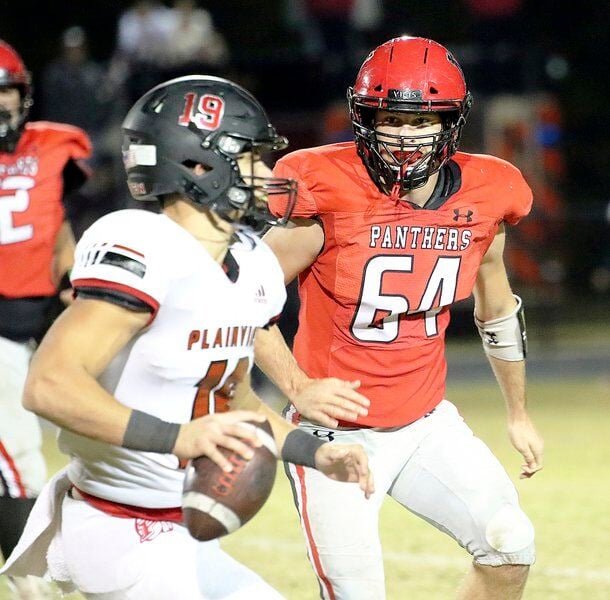 Pauls Valley's Mason Smith (#9) and Cole Campbell are in the face of Plainvew punt returner as he makes a catch during Friday's regular season finale. (PV Democrat photo by Mike Arie)

Both teams had already punched their tickets to the Class 3A playoffs but there was still a lot on the line Friday as Pauls Valley and Plainview tangled in District 3A-2 action.

Pauls Valley quarterback Justin Humphrey had 243 total yards, 178 passing and 65 rushing, with a touchdown to pace the Panthers. Mason Smith had a career high 129 yards receiving and Landin Weilenman added 86 yards rushing and a touchdown.

Both teams scored on their opening possessions of the game. Plainview scored quickly going 60 yards on five plays with Taylor racing in from 18 yards out for a 6-0 lead.

The Panthers responded with a 14-play drive that covered 74-yards and seven minutes off the clock. Weilenman and Humphrey carried PV down the field on the ground and a Smith catch for 41 yards gave PV a first down at the Plainview 4-yard-line. Two plays later, Humphrey dove in from 3-yards out for a TD and Juan Pablo Amaya's kick gave PV a 7-6 lead.

Plainview came back with an 11-play drive that carried over into the second quarter. Taylor capped off the 61-yard drive with a two-yard TD run and a 14-7 lead after a conversion pass.

Pauls Valley moved right back down the field behind a 38-yard run by Humphrey that gave PV the ball at the Indian 21-yard-line. The drive stalled out at the 15 as PV turned the ball over on downs.

Plainview moved quickly back down the field behind a 47-yard pass from from Taylor to Morgan Pearson. The Indians finished off the drive with Taylor hitting Jeston Gilliam with an 18-yard touchdown pass.

Plainview got the ball back in the third quarter and struck quickly. A three-play 65-yard drive ended with a 3-yard touchdown pass from Taylor to Pearson and a 28-7 lead.

Pauls Valley responded in the middle of the third quarter. A 21-yard pass to Smith moved PV into Plainview territory setting up a Weilenman's 35-yard touchdown run that cut the lead in half.

Plainview's Caden Pickens returned the ensuing kickoff 90 yards for a touchdown giving the Indians a 35-14 lead.

Pauls Valley's run game of Weilenman and Humphrey pushed the ball down the field. Eight plays later, Humphrey was in the endzone for a second time this time from 3 yards out cutting the lead to 35-21.

The Indians moved quickly back down the field and on the first play of the fourth quarter Gilliam raced in from a yard out for a 42-21 lead and win.

Pauls Valley finished fourth in the district and will be on the road at Heritage Hall on Friday in the first round of the playoffs. Plainview will be at home as they host Kingfisher.